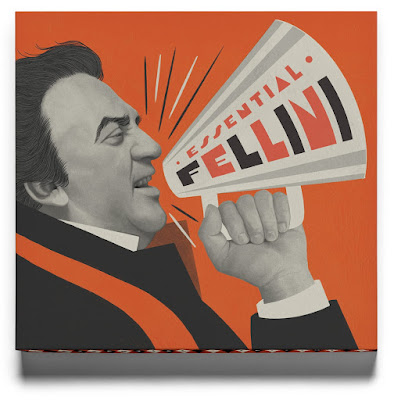 Wow wow wow, Criterion has just announced they're dropping a big boxed-set of Fellini films! Fellini's celebrating his Centennial this year, having been born on January 20th 1920, and so they're gifting us with a fifteen film "Essential" boxed-set, dropping on November 24th! I know what I'll be stuffing myself with this Thanksgiving.

How many of those have you seen? I am embarrassed to admit I have only seen six! Quelle horreur! Although the set also includes, among the special features, his Director's Cut of Toby Dammit, which is something more I have seen -- in fact it's my favorite Fellini of all the Fellinis I have seen. My love for Toby Dammit -- which was Fellini's third of the 1968 omnibus film Spirits of the Dead -- knows no bounds.

Click on over to Criterion to read more about and to pre-order the set now! You can watch the trailer Criterion cut together right over here. What a thrill! Let's pretend this means 2020 will be all better come November...
.
Who? Jason Adams When? 2:34 PM

It's a shame that the set doesn't have Ginger and Fred, his delightful late career tribute to television which stars his wife, Guilietta Masina and Marcello Mastrionni. I would also recommend not watching Amercord on Thanksgiving, especially after all the turkey!

I’ve only watched 5 but I only liked one. Am I a bad cinephile?

I have never seen la dolce vita, never got around to it. But I adore Nights of Cabiria. I couldn’t get through 8 1/2.