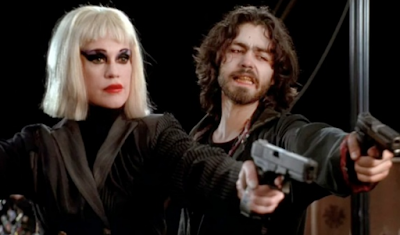 Honey: How can you be a drug addict in
the new millennium? It's so retro.
Lyle: Before I was a drug addict, I had so
many different problems. Now I just have one
-- drugs! Gave my life a real focus.

Unless he manages to pull one more film out of his singing asshole Cecil B. Demented will remain John Waters' second to last film, and Cecil B. Demented is turning 20 today. It got a limited release in nine theaters on August 11th, the year 2000, went wide that Labor Day -- "wide" in this instance meaning it made it into 82 whopping theaters across the country -- and managed to net less than two million bucks. Worldwide! 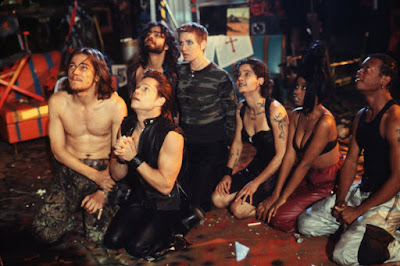 It was a flop, and having only just seen it for the first time about five years ago I can't entirely argue with it flopping -- I think its my least favorite John Waters movie? Granted I would rather be locked in a room for months with the worst John Waters movie than be forced to watch a single Michael Bay movie just once, so these markers are circumstantial to the nth. There's fun stuff to be had here. Sporadically. I believe I've got some CBD fans here on the site though, don't I? Speak up for your movie! I love being told I am wrong. And what would you call John's worst movie?

Multiple Maniacs is John Waters' worst, and Cecil B. Demented is his love letter to Baltimore. It is also Melanie Griffith's 2nd best performance; her best being that one opposite Craig Wasson, directed by Brian DePalma, no less.

Desperate Living is his worst. It starts strong but then becomes completely unwatchable.

I like all of his movies, but if I have to pick a "worst" or "least liked", my choices are Múltiple Maníacos and, to a degree, Desperate living.

Desperate Living is his best! You're all crazy! I'd rank Pecker last.

Multiple Maniacs is great. I’ve liked or loved everything he’s done. Cecil B Demented was a hoot.

I think it's unfair to be too hard on his earlier films. They are raw. He had no money. He created out of nothing but drive and determination.
I really like CBD!
I'd have to say his "worst" would be 'A Dirty Shame.' To me, it felt like he was trying too hard to be the John Waters of yesteryear. It's cute and has a few moments.