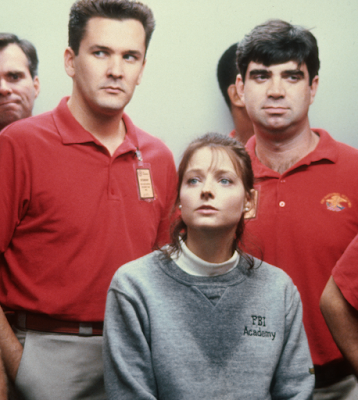 There's been a noticeable uptick in "Hannibal the Cannibal" chatter as of late thanks to Netflix putting both Jonathan Demme's 1991 film The Silence of the Lambs and Bryan Fuller's 2013 series Hannibal on their streaming service -- didja catch the cast and crew of the latter doing a Reunion Zoom last week? Anyway I felt like adding some chatter of my own sort to the din so this week's edition of "Great Moments in Horror Actressing" is tackling no less than Miss Starling herself -- click on over to The Film Experience for some thoughts I had while watching Jodie Foster do her inimitable thang ranglin' bad guys and rasslin' Big Patriarchy for the ten billionth time this week. I miss Jodie. Anybody else miss Jodie?

I was watching the HBO doc “I’ll Be Gone in the Dark” yesterday and said to my husband that Michelle McNamara reminded me of Jodie Foster. And then I realized she hasn’t been seen in anything for a while now. Where are you Jodie??? Come back! We miss you. I think the last thing I saw her in was that disappointing Matt Damon sci fi flick can’t remember the name.

After I posted that I missed her I went and looked at IMDb to remind myself where she's been -- that movie you're speaking of is ELYSIUM, which yeah, I didn't dig it either. More recently than that she was in HOTEL ARTEMIS, which wasn't actually half bad! Her role's not huge or terribly deep but it's worth a look if you find yourself in the mood.

She's also got in the can a movie called PRISONER 760 from the director of State of Play that's about Guantanamo Bay and sounds promising, cast-wise -- besides her it stars Tahar Rahim and Benedict Cumberbatch and Zachary Levi and Shailene Woodley. That is scheduled for next year but it looks like they already filmed it.

Ooh, that does sound good. I didn’t take the added step of IMDBing her. Thanks!