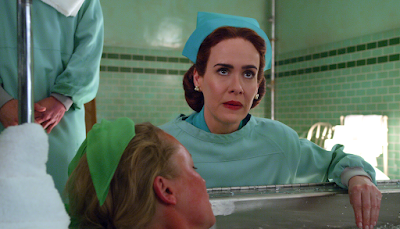 Vanity Fair has been kind enough to grace us with the first photos from Ryan Murphy's upcoming Netflix series about the One Flew Over the Cuckoo's Nest villainess Nurse Ratched, called simply Ratched -- actually I wish it was called "Simply, Ratched" because that would rule. In the film Louise Fletcher won an Oscar for her portrayal -- now comes, in the grand tradition of "Things Ryan Murphy has touched," Sarah Paulson to tackle the role. But more exciting than that to me is the supporting cast, which has Murphy finally getting his actressexual claws into both Judy Davis AND (drumroll please) the queen Sharon Stone! 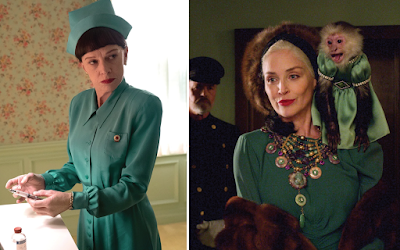 And not just any ol' Sharon Stone, but Sharon Stone with a pet fucking monkey. This is like that gif of Wendi McLendon-Covey saying she's going to give the gays everything they want, but in a TV show form. Up to an including COREY STOLL BEING ON THIS SHOW, but he's frustratingly not featured in any of these photos. We do see Murphy regular Finn Wittrock though! 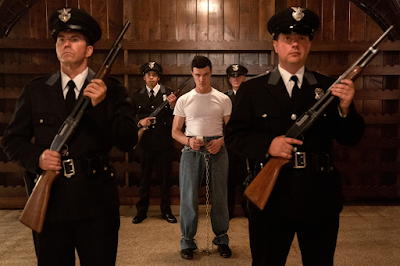 On that note there's a second picture that VF says is of Sharon Stone with Finn but I swear to all things holy -- by which I mean "Sharon Stone with a pet fucking monkey" -- that it doesn't look like Finn in the photo to me. The person looks WAY too young! Am I nuts? You decide... 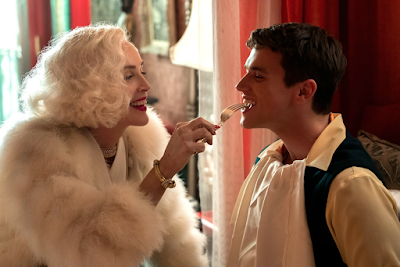 Ratched premieres on Netflix on September 18th,
meaning we will probably get a trailer soon!


ETA Vanity Fair has updated and confirmed that the picture is NOT Finn Wittrock -- it's Richard Madden friend and actor Brandon Flynn, who's in a single episode of the show.

I KNEW IT!!!!!!!!!! Vanity Fair has updated the caption, it is indeed Brandon Flynn (good catch @HiGirlsHiLouise
and @EricWoodsen2) and NOT Finn Wittrock like they'd originally said. Contrary to popular opinion all white boys do not look the same, lol pic.twitter.com/hOtTBhhEPt

It’s definitely Finn, but you’re correct he does look younger. Also I know it should about the acting especially with that stellar cast of actresses but we gotta get Finn and Corey nude!

I was almost convinced it could be Finn but then twas guessed on Twitter that it's Brandon Flynn, who is on the show for an episode, and now I think it's him!

Oh the guy from 13 Reasons Why and Richard Maddens former twink, yup I can see it. Nothing gets past your eye, good work

The last few seasons of 'AHS'were dreadful, and 'Hollywood' was so, so stupid. I hope this is better, as I have to watch it b/c Sharon Stone and Judy Davis.

It's definitely Brandon Flynn; Finn doesn't have that little cleft in his chin and the ear isn't shaped like his.

I was just commenting elsewhere that someone needs to introduce Ryan Murphy to Sharon Stone. I visualized it and it happened! (With pet monkey!)

I’ve been defending Ryan Murphy for so long but now I just feel beaten up and tired. The quality of his last few shows have been so poor I’m just exhausted and embarrassed. I’m sure this will be horrible BUT the actresses are so good I have to watch. Oy.

LOL I don't know who that is. I prefer my ignorance ;)

What is it with Sharon Stone and monkeys lately? I recently watched an episode of Better Things and she had a monkey (looked like the same one). Is it her acting therapy animal? That would delight me to no end.

Forget Sharon Stone. I am there for Judy Fucking Davis.

Queen Sharon Stone, the Last Diva, in a Murphy’s series...what a dream!