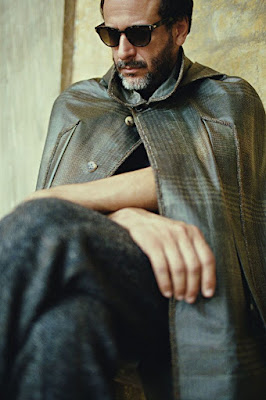 Have any of you watched Luca Guadagnino's short film for the fashion house Valentino called The Staggering Girl, which stars Julianne Moore and Mia Goth and Kiki Layne and Kyle Maclachlan? It is still on MUBI if you haven't, although you should temper your expectations as it is very much half an hour of Great Gowns, Beautiful Gowns -- lots of style, lots of fabric blowing in wind machines and rich people laying around in shadows, but not a whole lot of narrative. Then again maybe those are your expectations, the height of them, in which case I say you'll be satisfied! I personally was hoping for more of substance, with that cast and director, but it's certainly lovely to look at.
.
.

Anyway I was reminded of it when I read today's news that Luca has a fashion doc premiering at Venice this fall -- called Salvatore: Shoemaker of Dreams, it's about you guessed it the head of the Italian shoe-house Ferragamo, and that there up above is the first clip from it, featuring Martin Scorsese of all people. Sure, let's hear Scorsese talk loafers, why not. Listen I am not knocking Luca for making this -- dude is going to have free clothes for life at this rate. No wonder he can toss off expensive green Gucci jackets to Sufjan Stevens without a care in the world. You can see more of what will be premiering at Venice over here, including Bruce LaBruce's latest which we told you of last week...