If you'd have been in the room as I watched The Heiress for the first time this past weekend -- of course in honor of the passing of Olivia De Havilland, who won an Oscar for the 1949 film -- there's a chance you might have been lifted off the floor and swooped violently straight into my gullet as I gasped so loudly when Montgomery Clift showed up with a mustache at one point late in the film that atmospheric conditions around the globe were momentarily altered. The dew-point dropped precipitously! 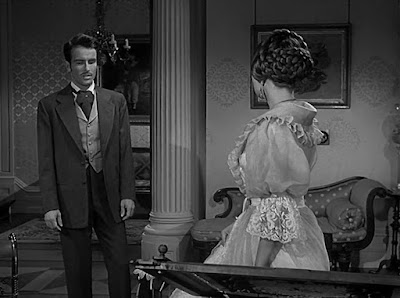 In all seriousness it's a delightful stache reveal for what it represents -- Monty's character Morris woos Olivia's almost-old-maid sans stache at the start of the movie, and she believes his heart to be good and true, but he's revealed to be a money-grubbing cad who's only out for her inheritance, and the next time we see him, many years have passed and in their place a mustache has grown. You know the joke about how somebody's Evil Twin is always played by the same actor just with a mustache? That's how this Stache Reveal feels... 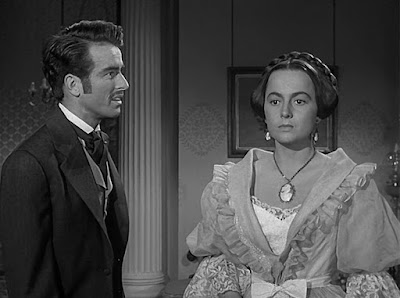 ... like now that we know the dark truth of what a shit Morris is his true, stached self can present itself. He looks now like he might tie Olivia down to the train-tracks at any moment! Mind you, this is not a complaint -- Monty with a mustache could tie me down to the train-tracks any ol' time he wanted to. I just think it's funny, how blatant this "immorality of the mustache" is played out across The Heiress. Still I must ask... 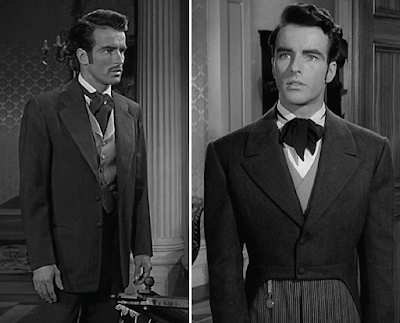 PS I also recommend you read our pal Dan Walber's piece on
The Heiress at The Film Experience this week; good stuff!
.
Who? Jason Adams When? 12:18 PM

Stache (and briefly big bush beard) served also Monty in Raintree Country (1957). In this case stacheless Monty: young man full of hope; moustached Monty: a family man who have known the tragedy of war and the difficulties to love a wife who endures many neurotic problems

He is in his absolute prime here, both with or without mustache.

He wasn't particularly happy with his performance but I think he does well even if he is slightly overshadowed by Olivia's juggernaut work, Ralph Richardson's silky coldness and Miriam Hopkins fluttering all over the place.

So we know you loved Monty but what did you think of the overall film?