What Do We Want? Deadites! 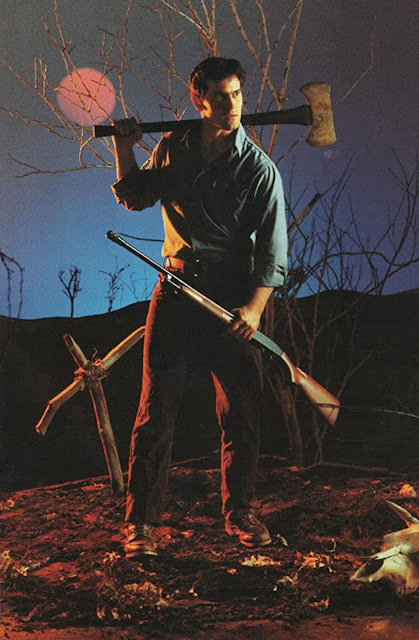 When do we want them? NOW!!!! New news on the Evil Dead front today -- the series is getting a new movie, one called Evil Dead Now, that like the 2013 film from Fede Alvarez will be totally unconnected to the original franchise... save, you know, Deadites and the Necronomicon and whited-out eyeballs and drool and barf and the like, one presumes. If you saw the terrific Irish horror film The Hole in the Ground last year then you're familiar with the new dude doing the rebooting -- here's my review of it; if you haven't seen it it's on Amazon Prime and I very much recommend you give it a shot. I dug it. (Ha ha get it, cuz it's called The Hole in the Ground. I am so damn clever.) Aaanyway Raimi & Campbell will at least be producing this new one; here's what Bruce had to say:

"We’re just getting off the phone with Lee Cronin, who is writing and directing the next Evil Dead. It’s called Evil Dead Now. Sam handpicked Lee – he did a cool movie called The Hole In The Ground. We’re going to get that sucker out as soon as practical. From this point forward, they kind of have to stand on their own. Which is fine. And liberating. You could have different heroes, different heroines in this case. This one’s gonna be a little more dynamic. We just want to keep the series current. And the mantra, really, is that our heroes and heroines are just regular people. That’s what we’re going to continue."

If you want nay need your Ashley J. Williams fix, and who doesn't, you can always go and watch the Starz series Ash vs. Evil Dead, which is entertaining enough for repeat watches and blessedly just sitting there waiting for you on Netflix right this minute. And in related news...