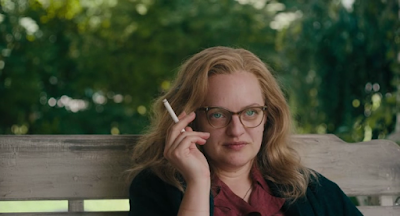 "I read your story. It made me feel thrillingly horrible." That's what Rose (Odessa Young) says when she first meets the writer Shirley Jackson (our queen Elisabeth Moss) at a party, and that is also what I would say if I met writer, director, and hard-edged genius Josephine Decker about this, her latest phenomenal film called, plain and simply as an unflattering flower blouse rimmed with ink stains around its edges, Shirley. Everybody does get that "thrillingly horrible" is high praise, right? This is a movie that demands of its audience first and foremost an understanding of that fact.

This is a movie that actually demands a lot from its audience -- patience, a nose in the dirt, an ear for insect thrumming. A cursory knowledge of Shirley Jackson herself would most definitely help -- the caustic recluse author of The Haunting of Hill House and the short story The Lottery, among many a tale of odd girls out, is seen here working on her 1951 book called Hangsaman (that title's a reference to an old folk song about a spoilt woman trying to bribe her executioner) which itself aims to tell the real-life story of a local girl who had recently mysteriously disappeared. As much as the movie Shirley is anything -- a biopic, a showcase for Elisabeth Moss again doing her ever astonishing thing -- it's also a whiff of a detective story, as Jackson sniffs out her spin on the girl's story, and why she's personally drawn to it. And you get the sense, skirt high, that Decker is there looking over Shirley's shoulder, doing the same hard inspections down upon these, her own frosty unknowable folks. 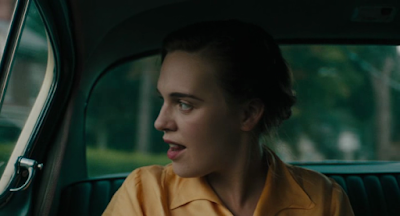 And that's where and how our Rose, innocent as the shallow grave caked under her nails, comes in. At the start of the story, literally -- she and her husband Fred (Logan Lerman) arrive at that party at Jackson's house, the one where she lives with her professor husband Stanley (Michael Stuhlbarg), as guests that Stanley's invited to stay til they find their own place. Oh and maybe do some cooking, some cleaning, and some managing of his mad wife while's they at it. Fred's a professor incoming at the local college where Stanley also profs, and yes if this hard-drinking partner-swapping literary four-way has you thinking of Who's Afraid of Virgina Woolf? that can hardly, at any moment, be considered a fraudulent claim.

Shirley takes one rough look at Rose, with her "thrillingly horrible"'d self, sizes her up, and with a barely-perceived smirk sees for herself a fine challenge -- she also perceptively sniffs out a baby, rightly, calling Rose with child on the spot. And so from there our dual tale spins forth of two married women, one flush with youth and sex (did I mention how reading about a woman getting stoned in The Lottery led Rose's hand right into hubby Logan Lerman's hot little lap?) and one with a little less of both but lots more of lots else -- each woman giving their own slow, pained births a show, a dance, a shimmy. Rose to a baby that seems to gladly spill a smidge of her sanity out with it, and Shirley to her book, the birthing of which seems to, alternately, straighten her out. One goes up, one comes down, they meet crashing knees in the center. 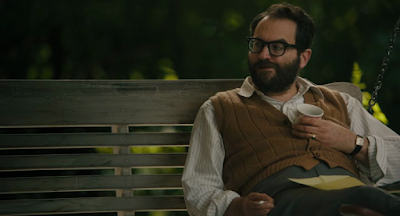 Each woman rubs off on the other, in their little big ways, but Moss' Shirley is a heftier vampire, stocky with practice and scotch -- watch the way she snaps her fangs at the Dean's wife and tuck away promising party-tricks for your own future. Meanwhile the linoleum creaks and the plaster gives up any and all its ghosts -- weather stains the ceiling while heavy curtains pop emphatic with dust, hot air, the searching paws of drunken over-educated men. You can smell the red wine soaked into every cushion, and Decker's camera skiffs on the motes overhead, in and out of focus. Shirley says things like "worms as fat as fingers" and the ladies discuss Freud, strangling, the breadth of the world's many killer mushrooms.

On that note many a "killer mushroom" movie's graced the past decade and Shirley slides in nicely alongside them -- alongside Phantom Thread, which its generous allowances for brilliant mean artists, and alongside Sofia Coppola's The Beguiled, with its creaky moss-piled house full of madwomen in the rafters, howling, smashing menfolk around. I'd also drop Shirley in alongside the best of Small College Town Academia Greats -- it'd make a helluva two-fer with my Wonder Boys, long beloved, as well as the aforementioned Virginia Woolf. People hold their liquor pooling in the beds of their fangs, their incisive wits and opinions.

The film's criss-crossing pathways for women in this world, the creative processes with which they put out living objects, be they breathing or book, is its bread and butter, for Decker and for her girls -- her commiseration with and inspiration at the hands of the aggressive and off-putting, with women whose heads are so full of thoughts they melt the paint off with their breath, is fire and ice and religion to me. The man's song starts and over it the soundtrack fills with scratching, barking dogs, crowds of insects and owls, the inside of an exhausted happy woman's mouth as she smiles and pictures the abyss flush with morning. 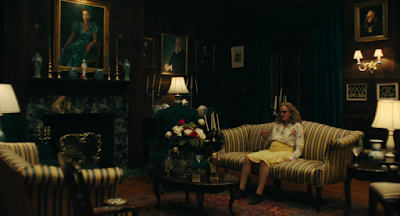 You can find a list of "virtual cinemas"
that are screening Shirley as of today at this link.
.
Who? Jason Adams When? 4:50 PM
Labels: Elisabeth Moss, Logan Lerman, reviews

Can’t wait! Watching it tonight:) I think I watched the trailer at least 100 times 😉

Favorite film of 2020 next to The Other Lamb and Swallow. All bewildered mad woman and how they all have life turning day when they let one person on that one found secret. Logan Lerman was pretty darn boooorrrrriiiiiinnnnngggg. There is always a way to act and use little nuances instead of being derivative. Rose my dear sweet rose when your head twitched twice and you said you don’t expect me to a little Wify like little Rosie. I about died. Elizabeth Moss is outstanding as ever and I believe this to be her best performance in a film. She really looked like Shirley too. Michael Stuhlbarg is always amazing but I hhhhhaaaattteed him. Not only was he an asshole but a total creep, philandering husband who steals all her and then runs at poor Rosie with disgusting food in his beard. I fuuuuccckkkiinng loved this movie ♥️