Has anyone actually seen Alexander Skarsgard's 2002 Swedish comedy Hundtricket? (That translates to The Dog Trick in case you just had to get rid of a childhood memory to make space for one more piece of shit pop culture item like I just did in looking that up.) I have posted about Hundtricket three times now, including this post, although all three posts have been pretty much exclusively about the shower scene you see here. The first time I posted video of it because it was 2012 and I didn't know how to make gifs yet. Which is why we're here a third time...

... so I can post gifs finally. (They're real large too, so click 'em to embiggen.) The second time I posted about it I posted a behind-the-scenes video from the shooting of the film, which included extra footage from, you guessed it, this shower scene. I was able to make gifs then -- that's a good post, make sure you check it out. But I've still never actually seen this movie. (And it wouldn't be too hard either, since the whole thing's on YouTube.) In fact it's only today that I realized... 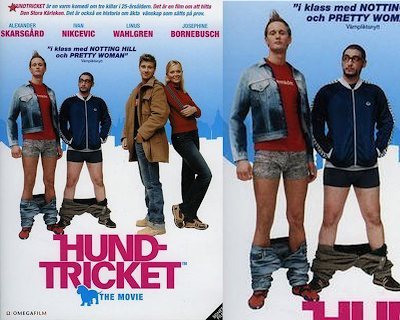 ... that the film's poster also holds some interest. God this thing is so 2002 looking. Anyway I was looking something else up this morning when I realized that MNPP didn't have these gifs, hadn't gif-ted them to the world before, so I decided to go ahead and do that even though Hundtricket remains a mystery to me all these many years into this. I think I'll survive not knowing? I just have a feeling this is as good as it gets. Hit the jump for the rest...

No, give me more Ivan Nikcevic. :)

Alex is incredibly sexy. I only wish he wore a loin cloth in his Tarzan movie.