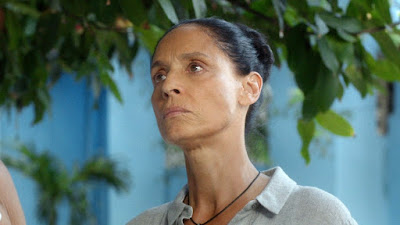 Clara: It's impressive what people say about lack of education, and they always refer to poor people, but lack of manners isn't in poor people, it's in rich, well educated people like you, the elite, who think they are elite, who think they are privileged, who don't stand in line, you know? People like you who took a "business" course, but lack basic human decency, who have no character, you know? No character, no I mean, you do have a character; your character is money, all you've got is your shit-eating smile; that's what you got.

Good god just reading those lines of dialogue makes me wants to stand up and cheer here at my desk! A happy goddamn 70th birthday to the queen Sônia Braga today -- if you're feeling crazy right now and need an outlet I suggest watching her two most recent masterpieces with directors Kleber Mendonça Filho and Juliano Dornelles, the one above and of course last year's Bacurau... actually it's this year's Bacurau, isn't it? I guess so, it was released here in March even though I saw it and reviewed it at NYFF in the fall. Anyway these two films will channel your rage into a great white light which you can then conveniently use to obliterate your enemies with. I recommend it! 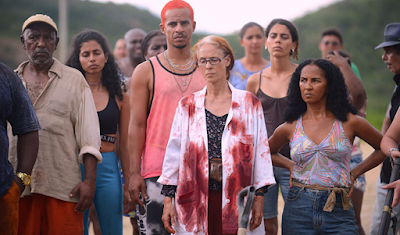