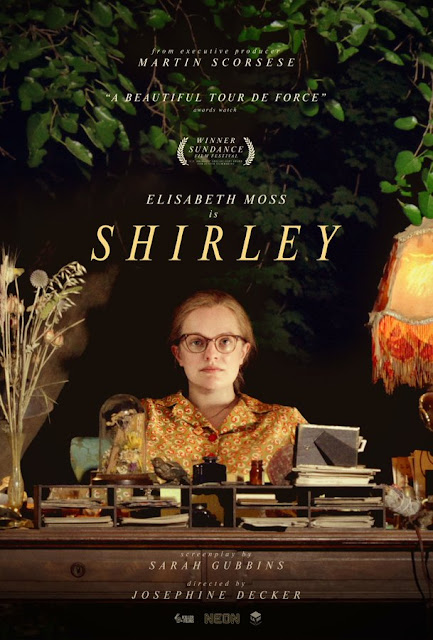 One of the movies I have most been looking forward to for 2020, disease be damned, has been Josephine Decker's Shirley. A biopic of Shirley Jackson starring Elisabeth Moss and Michael efffin' Stuhlbarg, directed by the talent that gifted us with Madeline's Madeline a couple of years back? How could I not be creaming my jeans for all that jazz? Well today comes surprise news (surprise to me anyway) -- Neon is now dropping the movie on June 5th! That's less than a month away! Holy Mother of Hill House my body is not ready. Word out of Sundance on Moss' performance was histrionically good, and the trailer they've just released shows a little of why:

.
Can Moss finally get a damned Oscar nomination this year? She's years upon years overdue but last year's snub for Her Smell was the egregious-ist of them all, and she's already turned in praise-worthy work in 2020 with Invisible Man. I say huzzah! Anyway I'm not sure on the specifics of this release -- all we've got is Neon's tweet about the release which says the movie will be "Everywhere" on June 5th. I'm guessing we're talking an online drop. I'll keep my nose to the pavement and let y'all know when it sniffs something of note!
.
Who? Jason Adams When? 4:21 PM

When does Elisabeth Moss sleep?

If the movie goes straight to streaming, is it Oscar eligible?

I haven't been paying a ton of attention to that but I do believe that AMPAS changed its rules, just for this year, so streaming titles are eligible... at least some of them. I'm not entirely sure of the specifics though

I love that the trailer features Jo Blankenburg song Baccarat. Odessa Young is on the brink of becoming a big star.