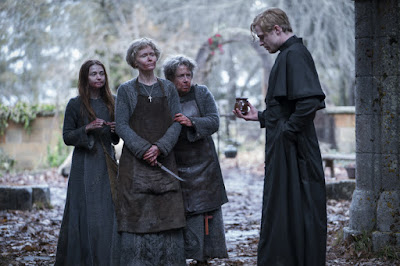 As alluded to in this morning's "Gratuitous Sam Reid" post there is a brand new series out for y'all to binge this week, and binge it you shall -- binge it you must!!! I binged it last week and it is a real binger. It's an Aussie series from 2019 called Lambs of God and aside from Mr. Reid the real spectacle is its three leading women, all of whom we're great big fans -- there's Essie Davis, who we fell for thanks to The Babadook, there's Ann Dowd, who we fell for because we have watched things in the past ten years of which she has starred in all of them, and there's the still terribly underrated Jessica Barden.

As for Barden we've loved her ever since the movie Hanna, where she stole her every scene as the normal girl that the weirdo girl Hanna befriends after she escapes from her assassin lab. Since then Barden's proven her greatness in movies like The Lobster (she's the girl with the bloody noses) and on the TV series Penny Dreadful and The End of the F***ing World; really any time Jessica Barden shows up you know you're in for a treat and here, once again, she proves that truth. 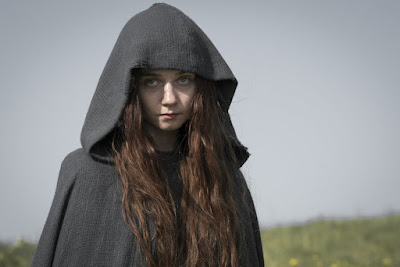 Lambs of God has that tremendous trio of actresses playing, wait for it, three semi-feral nuns (!!!) living in total isolation inside of a crumbling monastery on a remote and inhospitable island -- they're all a little mad in the way of cinematic nuns, with their ecstatic visions and whatnot. Then one day whammo out of the weeds appears a ridiculously handsome priest (played by the aforementioned Sam Reid, ridiculously handsome) and, well wouldn't you know it shit goes down. Some real shit!

The series won several AACTA awards (that's basically the Aussie version of the Oscars) when it aired there last year and now y'all can see it here in the US, thanks to the new streaming service called Topic, which seems to specialize in international television shows that you can't see anywhere else -- check out their website right here. The series premieres on Topic this very day and I very very much recommend it -- it's gothic and outrageous and well-acted, kind of like The Devils meets Dark Shadows. I had an absolute blast with it. I mean look at these three actresses and tell me you don't want to watch this right this second and I'll call you full nutso: 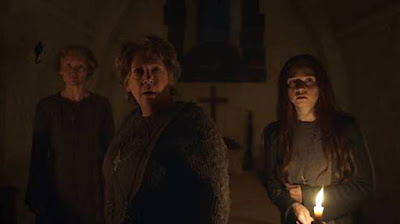