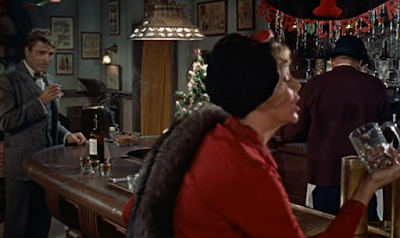 Lady in red on Christmas Eve: That's the trouble
with this stinking world. Nobody loves nobody.

108 years ago today the director Richard Brooks was born. 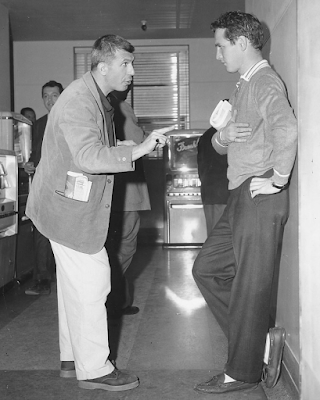 That's a picture of him (with some actor guy). Maybe you don't recognize Brooks' name? I wouldn't hold it against you because until a couple of weeks ago I could never remember it myself, even though the man's responsible for one of my all-time favorite movies (that would be Looking For Mr. Goodbar) and several others that I might not think of as "favorites" necessarily but that I still consider near perfect -- they would be the one-two "Paul Newman does Tennessee Williams" punch of Cat on a Hot Tin Roof & Sweet Bird of Youth...

... and then his brutally gorgeous 1968 adaptation
of Truman Capote's true-crime tale In Cold Blood.

A man who directs those four movies should have his damn name remembered -- his understanding of how violence does and should register on-screen via just Goodbar and Blood alone is top tier! But for some reason Brooks' name was like sand through fingers and I never could keep it in place. Then TCM screened those two Tennessee Williams adaptations a couple of weeks back and I had this realization, regarding my Richard Brooks blindness, I really registered it, and I did what I usually do -- I tweeted about it!

I feel like, given the evidence of these four fantastic films, I should do a dive into Richard Brooks. What else should I see? I have never seen Elmer Gentry... https://t.co/1v7q3VlnYk pic.twitter.com/SQyO92WFUg
— Jason Adams (@JAMNPP) May 2, 2020

If you follow that tweet over to Twitter you'll see a lot of fine folks who follow me there then schooled me on what else I oughta been watching from Mr. Brooks' career, outside of those four films, and for once in my godforsaken existence I actually did the homework. In the past couple of weeks I've checked out Brooks' 1971 bank-robbery caper titled $ (yes just a dollar sign, although I think you pronounce the title in plural, as in Dollars) starring Warren Beatty and Goldie Hawn...

Thanks to those of you who recommended $ (typing that title still feels silly), the 1971 bank robbery caper with Warren Beatty & Goldie Hawn -- watched it this morning and it's a ton of fun (And BONUS Warren gets real sweaty in his white dress shirt at one point) pic.twitter.com/IGrpyTpMtQ
— Jason Adams (@JAMNPP) May 2, 2020

... and I liked the film quite a bit. In fact it's one that's been sitting pleasantly on my mind, making space for itself, in the two weeks since -- I can feel that "like" turning into a maybe "love." I'm not a huge fan of Heist Films (I talked about this in relation to Hustlers last year) but $'s last act really goes weirder and more idiosyncratic than I expected, and now the movie kinda won't let me go. I have a feeling I'll be revisiting it often.

To make an already long post longer the second movie I did my Richard Brooks Homework with I just watched this past Saturday afternoon, and it's the one this post began with -- the Oscar-winning (and really very timely with regards to the world right now) movie Brooks made smack-dab in between his two Paul Newman adventures: Elmer Gentry with Burt Lancaster playing the drunk turned barn-storming phony-ass Christian Evangelist. The film got nominated for several Oscars and won acting statues for both Lancaster and for Shirley Jones as the preacher's daughter that Gentry long-ago corrupted, who comes back to get her vengeance in the film's final act. 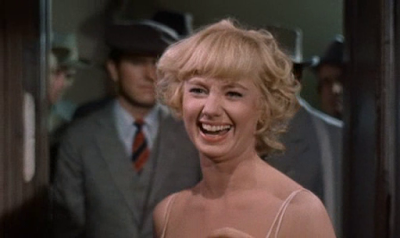 Jones is good in the movie but seeing just now that she beat Janet Leigh in Psycho for that statue really clenches my fists into tight little balls -- no, she certainly did not deserve to win over Janet Leigh. If I was going to give an acting statue to any actress in Elmer Gentry it would've gone to Jean Simmons, who gives the best performance in the whole damn movie as Sister Sharon Falconer, a cynical maybe maybe-not true believer -- Simmons truly keeps you on edge every moment she's on-screen. 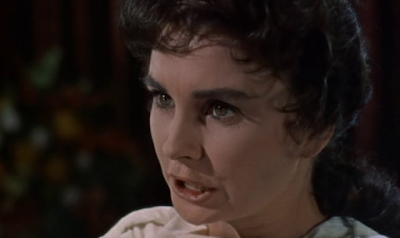 Lancaster though is great as well -- I never think of myself as a Burt Lancaster fan but then I see him in something and remember what a truly surprising and risky career he really gave himself. Going to Italy in 1963 to make a glorious movie with Luchino Visconti; strutting around butt-ass naked for a film truly as weird as they come with The Swimmer in 1968... 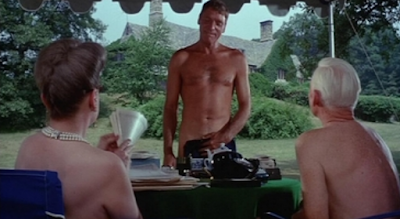 ... he really didn't rest on his football-stud shoulders and call it a day. As an aside, speaking of those shoulders, you can see some pictures of Lancaster in his 1947 prison movie Bruce Force (which was written by Richard Brooks) over on our Tumblr. But I digress -- I'm not here to talk Lancaster but rather birthday boy writer-director Brooks. I can now say I have liked-to-loved all six of his films that I've seen, and I think I should dig deeper. Maybe his 1966 Western The Professionals with Lancaster again and Lee Marvin? Bette Davis and Debbie Reynolds in The Catered Affair? 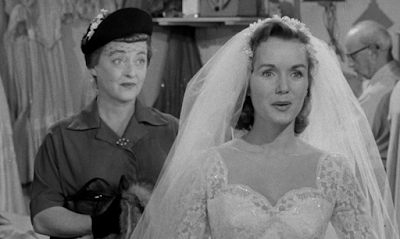 Brooks worked with Sidney Poitier a couple of times -- I've seen pieces of Blackboard Jungle but never the entire thing so maybe I should give that a go? Or what about Something of Value, Brooks' 1957 movie with Poitier that also starred Rock Hudson? Before I keep listing Richard Brooks' entire filmography let's end on that note, and hit the jump for a bunch of pictures of those two fine-looking movie-stars making for a mighty fine-looking pair... 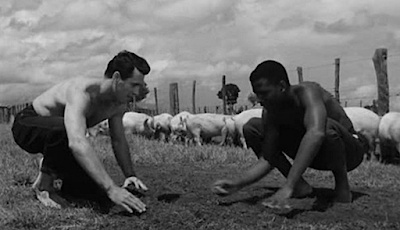 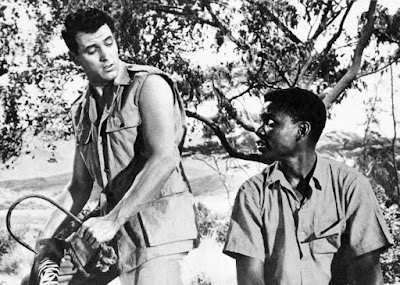 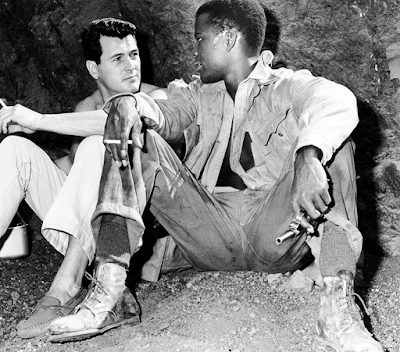 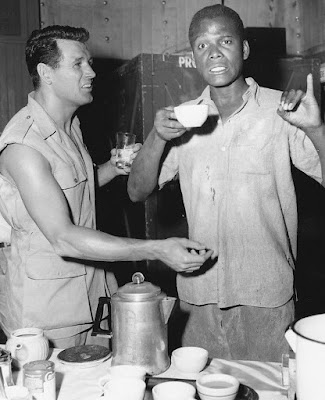 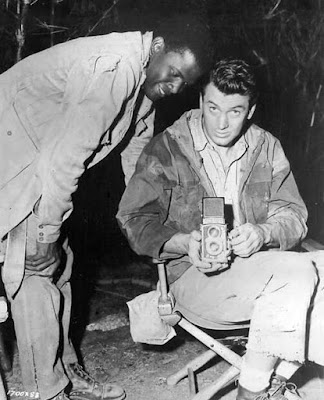 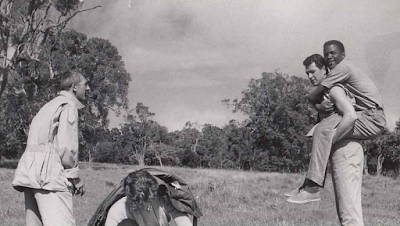 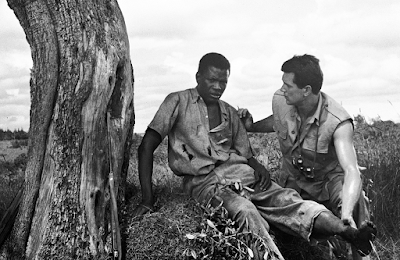 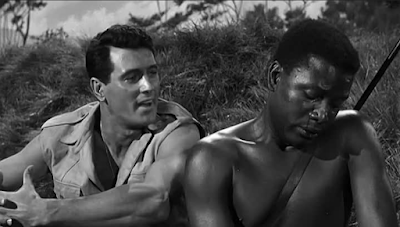 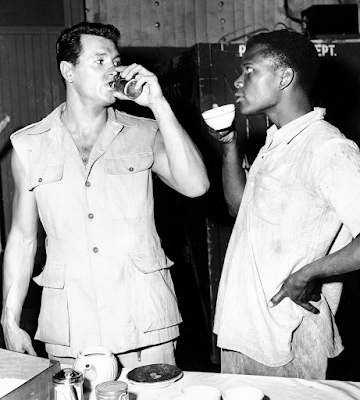 Absolutely see The Catered Affair. It's beautifully played as well as directed. Something different for Debbie at that point and she keeps up with Bette Davis and Ernest Borgnine with no trouble at all, though it's a bit hard to believe the genetic co-mingling of those two would result in Debbie Reynolds!!

I'd also say see Deadline-U.S.A. with Humphrey Bogart. It's not an essential for either but a good solid film.

I completely agree about Jean Simmons (ADORE HER) in Elmer Gantry! It's a puzzle how she missed on a nomination when the film was showered with them and she's so very good in it.

You know she became Mrs. Brooks for nearly two decades after this. They had a daughter together Kate-she had another daughter Tracy with first husband Stewart Granger (she was extremely close to Spencer Tracy & Katharine Hepburn both of whom mentored her in Hollywood). Regrettably she suffered from extreme alcoholism and Brooks hoping to make her aware of its severity wrote the film "The Happy Ending" for her about a woman whose life is coming apart for just that reason which he also directed. It's not that great of a film and very much of its time now but she's terrific in it and did receive a Best Actress nomination. Unfortunately it wasn't the wake up call she needed and as her condition deteriorated and he compensated by overwork their marriage came apart. She was finally able to get sober in the mid-80's and stay that way but it caused her a lot of grief.

Very good info from joel above. Jean Simmons was one of my favorite actresses growing up,although early on I kept getting her confused with Jeanne Crain. By the way, you did notice that it's Gantry and not Gentry right? Based on the very famous novel by Sinclair Lewis, whose novel Oil if I'm not mistaken was also the basis for There Will Be Blood.

Jean Simmons is amazing in Elmer Gantry...and, yep, the fact they loved the movie but not her puzzled me, even knowing that Sharon is not the most showy character ever