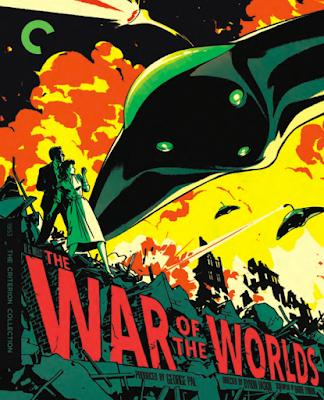 I didn't even realize today was New Criterion Announcement Day! What a thrill when this showed up in my inbox! Today Criterion's announced their titles for this July, and yes, you guessed it, it's a killer batch of eclectic awesomeness per the exquisite monthly routine. Up top you see they're dropping the 1953 sci-fi classic The War of the Worlds from director Byron Haskin -- have I ever told you guys how I had nightmares for weeks after seeing this movie as a very small child? The scene where the aliens are creeping around in the basement done Little Jason in, and hard. This disc will have a brand new 4K restoration -- I can't wait to see how those greens green and those reds red -- along with the typical tonnage of special features, including the original Orson Welles radio program that tipped the world on its axis in 1938. Next up... 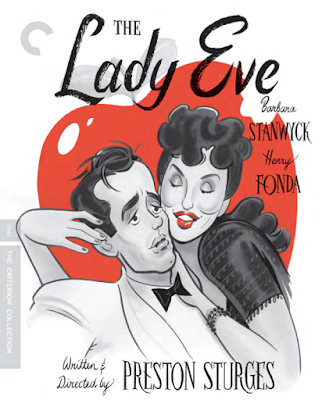 ... just one of the greatest film comedies ever crafted, Preston Sturges' 1941 classic The Lady Eve starring Henry Fonda and the queen, my queen, your queen Barbara "Babs" Stanwyck in possibly her greatest role. I should probably rank Stanwyck roles some time? I coincidentally just re-watched Ball of Fire yesterday...
.

.
... and that one gives this one a run for its money, but The Lady Eve is the better made film overall. You can't go wrong with Sturges. This disc will also get that 4K restoration plus all the extras you can cram into your teeny tiny purse to carry on a steamship where you'll romance a hapless kajillionaire by pretending to be your own double. It's the screwballiest!

Other titles that Criterion is dropping in July -- a massive boxed-set of Bruce Lee movies, Noah Baumbach's Oscar-winning Marriage Story (that was fast!), and Abbas Kiarostami's Taste of Cherry, which I have never seen. For someone who thinks Certified Copy is one of the greatest films of the new millennium I have actually seen way too few Kiarostami films -- that's what I ought to be rectifying during these quarantine weeks, dammit.
.
Who? Jason Adams When? 1:47 PM
Labels: Adam Driver, Babs Stanwyck, Criterion, Gary Cooper, horror, Laura Dern, Noah Baumbach

Uhh how do we feel about The Lady Eve cover though..?

I’m a huge fan of hers as well, she’s not quite my queen but definitely cinematic royalty. Love the idea of ranking her films though it could go two ways, her best performances vs. favorite films. There would be a strong overlap but for example I think her best performance is probably Stella Dallas but she made several other movies I like better than that film.

I’ve managed through the years to see all of her filmography (some real gems and some real dogs (Mexicali Rose is almost unfathomably excruciatingly awful with poor Barbara doing everything but putting a rose between her teeth to project the (absurd) idea that she’s a Mexican senorita!)

I won’t rank them all but I’ll do a top 25 of my favorites and in all of them I think she's great. The only times I’ve felt that she was off-not bad because she always gave her best effort but uncertain in her character-is the aforementioned Mexicali Rose and Message to Garcia another early flick where she is equally at sea as a native Cuban!!

1. Christmas in Connecticut-LOVE this film. She’s had much greater challenges and more impactful roles but this charmer never falls to make me smile and she is a breezy delight.
2. Titanic-She and Clifton Webb sell their story of a failing marriage among all the incipient tragedy so artfully. And you get Thelma Ritter too!
3. No Man of Her Own-She brings tremendous gravitas to what could have been a nothing soaper.
4. The Mad Miss Manton-Such an under-known pleasure
5. Double Indemnity
6. The Strange Love of Martha Ivers
7. Baby Face
8. Stella Dallas
9. Ball of Fire
10. My Reputation
11. The Lady Eve
12. Clash by Night
13. The File on Thelma Jordan
14. The Purchase Price
15. Jeopardy
16. There’s Always Tomorrow
17. Walk on the Wild Side
18. The Bitter Tea of General Yen
19. Remember the Night
20. All I Desire
21. The Furies
22. Lady of Burlesque
23. Annie Oakley
24. The Miracle Woman
25. Meet John Doe

I love you, Joel! Seriously your comments always delight me -- what a wonderful list! Funny enough after watching Ball of Fire last night I started and immediately stopped The Mad Miss Manton -- I've never seen it before! I had to stop it because I got stuck on a telephone call, but I'll probably watch it later this week. I'm excited to see a new one!

When I was teaching my Science Fiction film class I always showed the 1953 War of the Worlds because I had to show a "bad" movie. I actually don't think it's that bad, but as a friend of mine pointed out, the Martian ships look like Edsels. That always made me laugh. Of course my students loved it!

I'd love to hear what you think of Mad Miss Manton! She's in screwy heiress mode (her character is the delightfully named Melsa Manton) and of course she's reteamed with Hank Fonda. The two of them also have such a light easy camaraderie.

Am I going to have to be the one to break it to ya? Henry Ford built a fine Model T but he did not take time out to star in that most excellent film The Lady Eve. That was Henry Fonda and young Fonda was way prettier than Ms Barbara S. Over time I have seen it about 5 times. It's due for another run soon.

LOL good catch wehobob -- this is why you don't type during a pandemic, your brain gets distracted ;)