Read to Me, Dolly 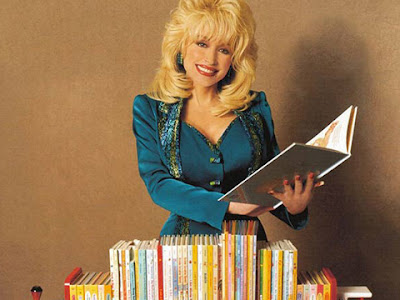 You know we're in A Real Place right now because I kind of cried a little bit reading this news meant for children -- Dolly Parton is going to read a children's book to, you know, "children" on YouTube every Thursday night for the next ten weeks. The YouTube channel is at this link here -- it's somewhat promotional in that there's a documentary about her famed Imagination Library, which has been donating millions of books to kids since 1995, that was scheduled to come out in April and which has just been moved back, release-date-wise to September. The doc is called The Library That Dolly Built and the trailer's down at the bottom of this post.

I don't know about you but there seems to be only one thing in this world that every person can agree on and that is Dolly Parton, and the thought of her reading a bedtime story to me once a week in these trying damn times is like the warmest blanket I've ever imagined; hence the tears. I will be there anyway, and I think y'all should join us. This becoming a thing sounds like the first actual sense of comfort I've felt in three weeks. Dolly is magic.
.
Who? Jason Adams When? 11:39 AM
Labels: Dolly Parton, trailers

Her Instagram video post a couple days ago where she sings and talks about light and hope made me burst into tears.