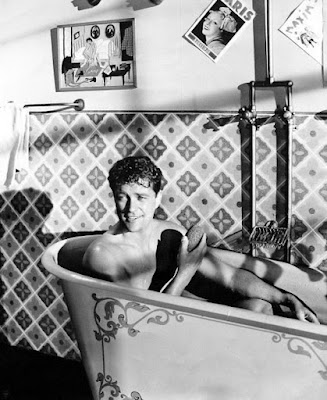 I don't know much about the actor Dennis Morgan except he was in Christmas in Connecticut and according to Wikipedia he was a "lifelong staunch conservative Republican" so perhaps I should tread lightly, posting his picture. But then I've seen his Christmas in Connecticut co-star my beloved Barbara Stanwyck described as a Republican and I always cut her slack because 1) I fucking adore her and 2) that meant kind of a different thing sixty-ish years ago. Anyway this morning I saw this photo of him taking a bath in the 1943 movie The Desert Song and I figured I'd ask if y'all have any words on the actor Dennis Morgan. Hmm?
.
Who? Jason Adams When? 10:59 AM

Dennis Morgan is a Wisconsin boy. He co-starred opposite Ginger Rogers in her Oscar-winning title role in Kitty Foyle. If you watch that astounding giant staircase scene in The Great Ziegfeld, Dennis Morgan is the singer at the top, crooning "A Pretty Girl is Like a Melody."

I've never heard of him but until you mentioned Barbara Stanwick I assumed he was working now.

He had the cutest lips. And I like to think being a Republican meant something different in the 40s-50s. (BTW, Stanwyck was a Republican too!)

He was certainly attractive in that roguish Irish way and he had a warm robust tenor voice which was well utilized by Warner Brothers when he was there. He wasn't a particularly insightful actor but he was always competent and professional and on occasion more than that.

The best performance I've seen him give was in "The Hard Way" wherein Ida Lupino tears the joint up as an ultra coldhearted climber who will stop at almost nothing to get her sister Joan Leslie to the top! It suffers a bit narratively since Joan Leslie, pert and pretty though she was, wasn't an especially talented singer or dancer (if only they could have cast Judy Garland or Deanna Durbin the film would really cook) but Morgan is the one person who has enough force to stand up to Ida even though she tries her damnest to plow over him.

LOVE Christmas in Connecticut so much!!!! It's one that is a must watch every season.

Being a Republican, even a staunch one, was a very different thing years ago. For one thing they neither ate their young nor would have been okay with sacrificing their elders for a buck unlike some of the scum that supposedly represents the party today.

I’m not very familiar with his work, but I share the adoration for Stanwyck and Lupino. Even if I’m not from USA I can agree that being republican was something different back then