10 Off My Head: Social Distancing Tracts 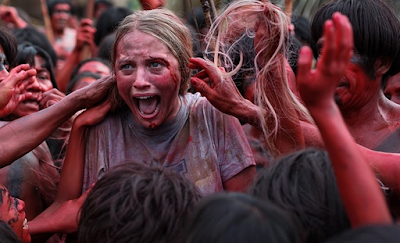 Once upon a time we told people there was safety in numbers, but the Coronavirus has laid that old chestnut in its final resting place, RIP. Welcome to the Age of Social Distancing. We're now encouraged -- the word "encouraged" feels ridiculously inadequate -- to keep the depth of a grave, six feet, between our bodies and those of strangers at all times. How this will shake out in the long run is anybody's guess, I'm no future theorist, but I do know that the Movies have been telling us about the danger of large crowds for ages and that, as a lifelong misanthrope and wannabe shut-in, is a subject I do find myself particularly versed in. So here, a list of such lessons, to make us feel a little better about our self-isolating this Sunday... next Sunday... the Sundays after that...

10 Movies Scenes That Encourage the Keep Away
.
.
The Birds (1960) -- You're not exactly safe when you're alone (see that attic scene) but every time people gather into groups in Alfred Hitchcock's 1960 animal-attack masterpiece is when those lil' birdies really drop out the stops -- Cathy's birthday party? Check. Everybody shut up together in the diner in town? Check. Hell even five people standing around in a living-room is too much, too many. But it's the one-room school house full of innocent little kiddos where Hitch unleashes his most morbid fury -- close the schools, he cries! Risselty rosselty, or else!
.


.
The Matrix Reloaded (2003) -- Nothing most people would define as "bad" actually happens during this scene from the Wachowski's second Matrix movie -- people dance and have sex and feel oh so sexy, ooh la la -- but I'm not most people, and this scene in this movie always set my phasers to cringe. So much tattered knitwear and embarrassingly sloppy touching. No thank you I say! Keep those fingers to your damn self, Harold Perrineau!
.
.
An American Werewolf in Paris (1997) / Blade (1998) -- The admittedly killer opening scene of Blade always gets credit for this conceit, that of mythical beasts (in Blade's case vampires) luring unsuspecting humans into being the surprise main course for an orgy of bloodbathery. But the slightly underrated (if only for how damned cute Tom Everett Scott is in it) American Werewolf sequel actually did it a year earlier with its lycanthrope dance club called Club de la Lune that locks its doors as the moon goes full for its monthly monster feast.
.
.
Scream 2 (1997) -- One of my favorite things, as an introvert with isolation tendencies already baked in, about living in a big city is the way you can feel absolutely alone even in the most crowded of places. I once, in the middle of an emotional breakdown I won't get into, took a train ride to Times Square and sat down among the tourists and had my breakdown there, unobserved, and there was real comfort in that disappearing act. That said this same idea has its horrible flip-side, maybe never better observed than in the opening scene of Scream 2, where the masked killer manages to brutally murder Jada Pinkett Smith's character in full view of a swarming whooping-it-up crowd without anybody even noticing until she drops dead in front of the movie screen.
.
.
Blow Out (1981) -- Similar to that above scene from Scream 2, the deeply downer final act of Brian De Palma's 1981 master-class in tension editing sees Nancy Allen's character snatched by the murderous John Lithgow in the middle of the great big Bicentennial festivities in downtown Philadelphia, fireworks exploding around them as he strangles her to death, her would-be hero John Travolta unable to get to her in time because the damned marauding parade people that won't get the hell out of his way. RIP Sally, you queen.
.
.
Messiah of Evil (1973) -- Somewhere between a zombie movie, a cannibal flick, and a Body Snatchers sorta film, only doing it with more style and hallucinatory strangeness than most of those much as I love 'em all have conjured, this Willard Huyck & Gloria Katz directed freak-out classic sees some unsuspecting tourists getting more than they ever might have bargained for while visiting the remote seaside "artist's colony" of Point Dume, California. (Dume, Doom -- get it?) Like an episode of Dark Shadows written by Hunter S. Thompson on a real bad trip, we see them set upon one by one by ravenous but surprisingly well-dressed and coiffured ghouls -- the two stand-out scenes involve a supermarket and a movie theater, the latter seen above in all its "who's that suddenly breathing down my neck" glory.
.
.
Midsommar (2019) // The Wicker Man (1973) -- Our pal Stacie Ponder of Final Girl calls them "Town with a secret" movies -- the just mentioned Messiah of Evil is definitely one as well -- where a stranger comes to a remote place and unravels its dark mysteries always just a second too late to save themselves. But you add the white-eyed fanaticism of religion to the mix, like this double-feature does -- see also some of those Mrs. Carmody scenes in The Mist -- and you've got a real recipe for craving a safe cloister somewhere far, far, far away. That moment when you look around yourself and see only mad smiles smiling back? I say no thank you.
.
.
World War Z (2013) // Train to Busan (2016) -- Zombie movies are the pinnacle of Social Distancing cinema -- they've been warning us about the way crowds can gobble up our guts ever since Barbara got trapped in that farm house, and I could've done a list of only them. But none of them have gone to quite the extent that these two recent entries have in detailing a literal crush of bodies -- monstrous stampedes stretching as far as infinity, even towering up into the sky. Busan's train station scene is particularly notable -- the way the hordes spin and smash and flop through glass and keep coming to swallow us up.
.
.

The Host (2006) -- I've always felt more mixed towards Bong Joon-ho's much heralded monster movie than most people but there's no denying the triumph of the fish monster thing's first attack in broad daylight in a heavily populated waterside park in Seoul, South Korea. Tossing out every rule about how much of the monster we're supposed to see until its late-film reveal this scene happens only eleven minutes into the film, immediately showcasing the monster in all its CG glory, and telling us right upfront that there is no safe place to stand.

.
.
Society (1989) -- The one that brings them all together -- It's a town with a secret! It's cannibalism, it's hallucinatory, it's a single-minded horde! It's the misbegotten sexiness of The Matrix's rave scene smashed up with the misshapen tangle of bodies in Train To Busan! It's the social critique of Pasolini's Salo as play-acted out by Garbage Pail Kids cards. It's all of those things multiplied by Cronenberg, divided by Lynch, straddling George Romero's throbbing metaphorical member. It's the most insane scene I think I've ever seen in a movie in my entire goddamned life, and somehow it's on YouTube right now. I don't know how, but it is. Brian Yuzna, you absolute nutter, bless.

The whole movie of mother! is pretty much all I need to keep away from large groups of people.

That scene from MESSIAH OF EVIL reminds me, for some reason, of the denouement of LET'S SCARE JESSICA TO DEATH. The 70sishness? The freaky old ghouls? Now I'm intrigued enough to watch the whole durn thing. Thanks, social distancing!

Hi Jason, this is way late and after the fact, but I have to tell you that in the lovely and amazing Messiah of Evil, the name of the town in question is Point DUNE - as in Sand dune, dontcha know. Just hadda clear that up!
That scene in the movie theatre is so blood-chilling to me.