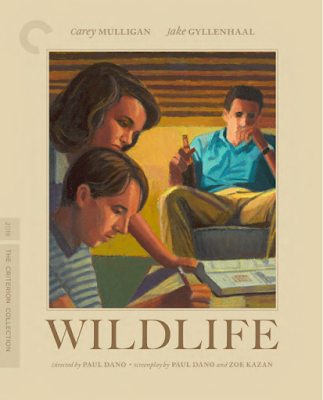 This news is exciting enough that I'm breaking into my "Self Care Day" to share it -- Paul Dano's emotional powerhouse of a directorial debut Wildlife, starring Carey Mulligan and Jake Gyllenhaal and which I called my 9th favorite movie of 2018 (and honestly I've been feeling the need to shift my 2018 list around lately, and Wildlife would definitely move up some), is getting Criterion's deluxe treatment on May 19th. This is like fireworks and champagne sort of news. Outrageously the movie (here is my original review) hasn't been released on home video at all before now -- it's only been on streaming, which I didn't even realize (as I have had a screener of it all this time). So this is WAY overdue, and I hope this solidifies this great film's place in the right great place, and people will appreciate it more than they had in 2018 when blasphemy of blasphemies Mulligan, who gave the actual second best performance of the year, didn't even get an Oscar nomination. Hit the jump and I'll share the Special Features which all look great with you...

Boy! I just watched this because of this post, the beauty and the horror. Thanks for ripping my heart out on Valentines Day.

Boy! I just watched this because of this post. The beauty and the horror. Thanks for ripping my heart out on Valentines Day.