The Book of Bomer 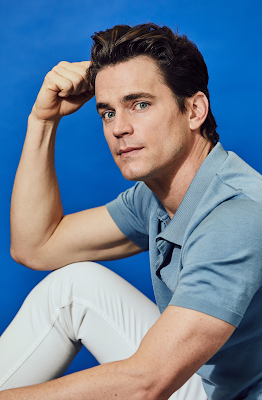 This post has exciting Matt Bomer news in it which I will get to in a second, but its primary focus is reminding me to start watching the latest season of The Sinner which has Matt flashing bum and Chris Messina in it -- Chris Messina in the show, that is, not, you know, Chris Messina in Matt's  bum. As far as I know. I feel like, were that to be the case, I would know that? I would feel that like a vibration in the homosexual force. Anyway even without that why I'd need a reminder that this show is happening is a mystery to me, but the fact that I haven't started the damn episodes yet proves it so.

Anyway, again! Yesterday Deadline shared word that Bomer is going to star opposite the never not great Ruth Wilson -- seriously, never not great -- in a movie called The Book of Ruth, which promises to tell the true life tale of a Christian woman in 1983 Arkansas named Ruth Coker Burks who became a celebrated caregiver for people with AIDS (thx Mac). Matt will be playing her new neighbor, a gay man who's returned to his small hometown after the death of his partner in NYC. Surely goofy hijinks then ensue, like they rob a bank or something. Somebody gets a pie in the face. Hilarity ahead!
.
Who? Jason Adams When? 3:07 PM

I hate to be a naysayer because I love Matt Bomer and I like Bill Pullman too but I couldn't get into The Sinner at all. I struggled through the first two episodes but I just couldn't care.

Have to disagree with Joel. I think Sinner is interesting as always, and at least in the first two episodes there are implications of some kind of homo/possibly erotic elements between Chris and Matt. I binged the first two seasons having discovered it on Netflix or Amazon, but having to wait week to week is annoying. Matt is quite good and Chris's true character has yet to be revealed by Episode 3. My only concern is that the ensuing mystery may not be complicated enough to sustain 10 episodes and so there are hints it's being stretched out or padded a bit. But it's certainly enough for me to stay with it.