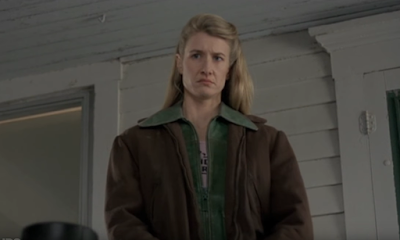 Ruth: I'm gonna stay here. and I'm gonna have
that abortion like I wanted. Cuz I'm a citizen
and... and I got my rights to, um, PICK!

As she mentioned as she clutched her Academy Award for Best Supporting Actress just last night it is indeed the great Laura Dern's birthday today, and we gotta celebrate. Not with Marriage Story -- although I'll probably be defending her win for that movie for the rest of my life, since I think she's killer in it and it's not just a career win -- but with Alexander Payne's immortal abortion epic Citizen Ruth, which I just re-watched a week or so ago and which holds the hell up, lemme tell ya. 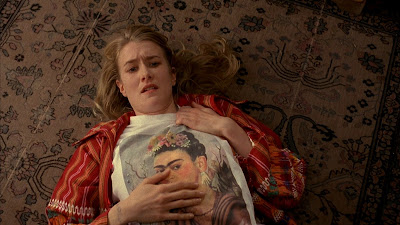 Citizen Ruth still feels risky in 2020 -- hell it maybe feels even riskier now? We've certainly moved backwards when it comes to women's rights. And this film sticks a dagger in the heart of it all, popping off truly dark one-liners with absolute glee. It's a marvel, and Dern is a marvel in it. Ruth Stoops is obviously awful, but Dern shades her a lot more than I'd recalled, making her feel human even as she wonders if she's maybe slept on some babies in some dumpsters.
.

.
And obviously when it comes to Dern we've only fondled the tippy tip of the iceberg here -- she's been one of my favorite actresses since she made her cry face in David Lynch's Blue Velvet... hell even earlier than that I remember my English Teacher making us watch Smooth Talk after we read Joyce Carol Oates' story "Where Are You Going, Where Have You Been?" in Junior High. She's always been there, and she's always been great, and I love that this entire awards season turned into a celebration of the Dern.