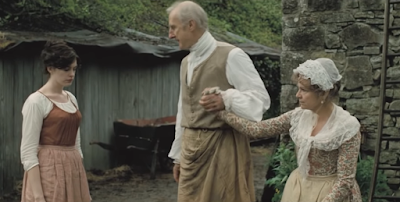 Reverand Austen: If a woman happens to have a particular superiority, for example, a profound mind, it is best kept a profound secret. Humour is liked more, but wit?. No. It is the most treacherous talent of them all.

When I close my eyes and try to recall Becoming Jane I picture... Joe Wright's Pride & Prejudice. Does that happen to anybody else? Keira Knightley swaps out Anne Hathaway, Matthew Macfadyen for James McAvoy, and James Cromwell for Donald Sutherland... I mean if I tested you to say which one of those actors was in which one of these two films could you answer them all correctly? I sure couldn't. I think that's probably by design, to some degree. Wright's film was by my recollection the far superior film, but Becoming Jane did have James McAvoy's shirtless boxing scene...

... so perhaps it's ultimately a wash. I don't know. What I do know is it's James Cromwell's 80th birthday today and this celebratory post was either going to be this or him saying "That'll do, pig" in Babe, and this one allowed me to post shirtless James McAvoy. You can see how I fell.
.
Who? Jason Adams When? 1:07 PM