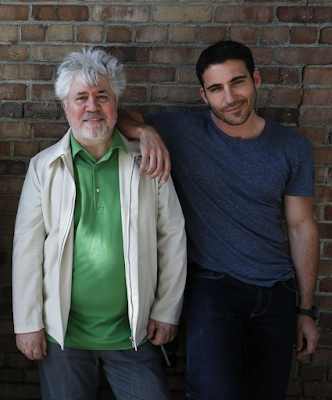 I don't usually link to things for sale on iTunes because I am a hardcore believer in physical media and think you should buy blu-rays of movies so you actually own the movies and aren't just leasing them until the streamer decides to disappear the thing you've paid for, but this one's too good not to -- iTunes has all of Pedro Almodovar's films on sale for $4.99 a pop today! And when I say "all" I am pretty sure I mean "all" which is the thing -- a lot of his earlier films are hard to get a hold of here in the US in HD but they've got Matador and Pepi Luci Bom and High Heels and Law of Desire and Kika and Dark Habits (ahhh I love Dark Habits) and Labyrinth of Passion and What Have I Done To Deserve This... everything dammit! The boxed-set of Pedro's movies, which only has eight of his films, is out of print and sells for a couple hundred dollars so this is really the best way to see these movies for now. And they are all, each and every single one, worth seeing! (news via)

Almodóvar is such a drug — I watch one and I immediately want to rewatch them ALLLLLLL
— Jason Adams (@JAMNPP) January 12, 2020

.
In related news I spent a chunk of this weekend drooling over Criterion's forthcoming release of his 1999 masterpiece All About My Mother which is out on January 28th -- speaking of physical media, you're gonna want to rub your body parts on this disc, believe you me. Stunning, gorgeous, all of the happy gay adjectives apply.
.
Who? Jason Adams When? 12:51 PM

Amazon has them too. I just bought 9!