I know in theory there is pleasure to be had from cornball comfort-food television but man alive, and I say this with all the love in the world for Dolly Parton in my heart, her Heartstrings program on Netflix nearly busted my saccharine-meter. Picture all those little smoking wheels and springs going "yoing yoing yoing" out of it like a cartoon clock on overdrive and that was me, with this show. Granted I only managed to watch one and a half episodes, including obviously the one that starred my beloved Colin O'Donoghue... 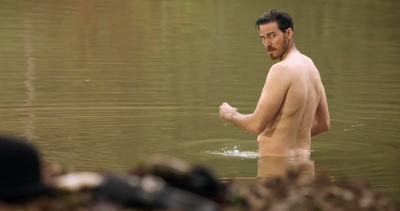 ... as a pond-prone bad-boy cowpoke called "J.J. Sneed" after Dolly's 1970 song. Did anybody watch this episode, or any of Heartstrings? I know some of you people watched Heartstrings. I heard there's a gay episode -- should I watch it? Or should I just stick with staring at all of these gifs of my beloved Colin O'Donoghue giving us the rest of his PG-rated skinny-dip (also known as "his best on-screen shirtlessness to date" if you can believe it) after the jump... 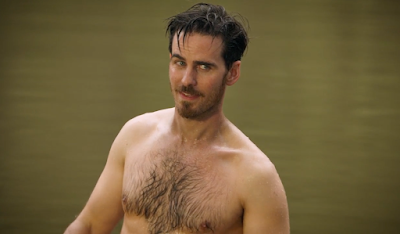 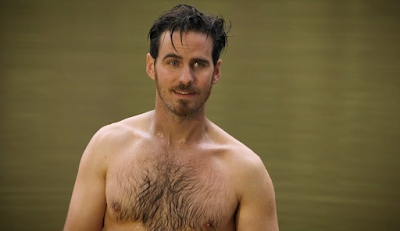 These Old Bones is the strongest episode. Kathleen Turner deserves an Emmy for sure!

I thought "Two Doors Down", AKA The Gay One, was better written and performed than it had to be, considering the Hallmark Channel production values and Steel Magnolias-adjacent script. The ending goes on too long, and there are too many neat dramatic reveals, and Oscar winner Melissa Leo kind of makes a fool of herself with the wedding cake topper. All that aside, it still has a lot of non-sappy things to say about honesty and acceptance. If anything can change the world, it's Dolly casually dropping the word "transgender" into her introduction.

I love heartstrings...the world would be a whole lot better place if there were more folks like Dolly ...Dolly for president :)
the gay episode is cute and nice and a bit corny but no agenda and the main gay guy is smoking hot :)