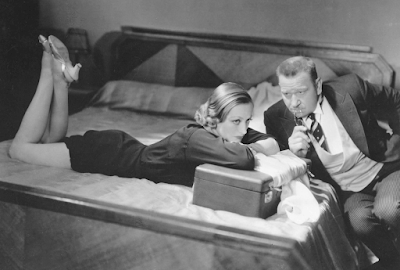 Flaemmchen: You know I always say that nothing should be left hanging over. And names are like that. Suppose I met you next year and said, 'How do you do Mr. Preysing?' And you said, 'That's the young lady who was my secretary in Manchester.' That's all quite proper. But supposing I saw you and yelled 'Hi baby. Remember Manchester.' [he laughs] Yeah, and you were with your wife. How would you like that?

I'm thinking about the costume designer Adrian today because (as you'll see below) they have some of his dresses on display at The Met right now for their show "In Pursuit of Fashion: The Sandy Schreier Collection" which showcases pieces via that fascinating woman, who's been dubbed "the world's largest private collector of couture clothing." (Read more about her here.) As far as I could tell none of Schreier's Adrian pieces are actual costumes from movies, they're things he designed on his own, but they all have that sort of flair -- here's my favorite piece they have on display: 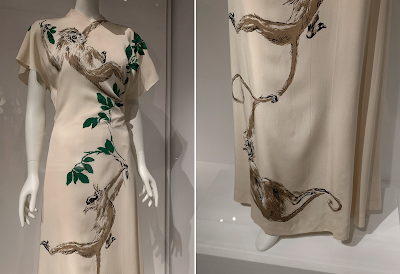 I choose to believe that this dress is a reference to Adrian's Wizard of Oz costumes -- once you've costumed a Flying Monkey there's no going back. Anyway I randomly chose Grand Hotel for today's quote up top out of the hundreds of credits Adrian had as Costume Designer -- you can't go wrong with Joan Crawford threatening somebody -- but she really did have the craziest assortment of outfits in that movie...

Earlier this month Rizzoli actually just put out a brand new coffee-table book on Adrian called Adrian: A Lifetime of Movie Glamour, Art and High Fashion -- has anybody checked it out? If they did a good job I think it might be the perfect holiday gift for that classic movie lover slash homosexual in your life. There have been a few books put out on Adrian but I somehow don't have any, the horror! I keep almost buying the one perfectly titled Gowns By Adrian from 2001 but then I keep hoping it'll show up in my stocking. Now there are multiple choices, cough cough, people in my life... 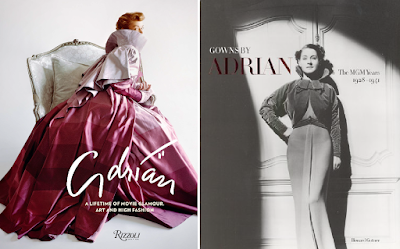 If you had to choose a favorite Adrian costume off the top of my head -- and I love that I have a website read by people who could answer such a question off the cuff, but here's a nice collection of images if you need a reminder -- which would you choose? While you consider that here are some more of the photos I took at the Met this weekend:


Highlights from the Sandy Schreier Collection on display at The Met (lots of GOWNS BY ADRIAN) #art #fashion #adrian #design #dress #hat #gownsbyadrian
A post shared by Jason Adams (@jasonaadams) on Dec 1, 2019 at 1:01pm PST

I've seen the full Adrian book, but I have Gowns by Adrian. I recommend you watch the original 1939 version of The Women and pay attention to the fashion show. You can really see the influence of The Wizard of Oz on the clothes featured in the film, especially the hats.

SO many choices to pick from but I'm going with Jean Harlow's satins with the huge feathered cuffs in Dinner at Eight. It such an iconic look and suited her perfectly.