We Laughed in the Faces of Kings 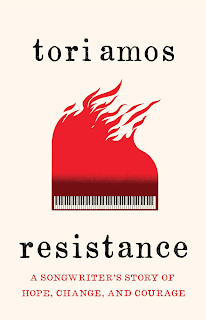 Lots of new news regarding some of my favorite 90s ladies today -- Alanis Morrisette announced an acoustic concert here in New York next month, and now Tori Amos has announced she's written a book! It's called Resistance: A Songwriter's Story of Hope, Change, and Courage, and it sounds less like an autobiography and more hella political, which in my opinion kicks all kinds of ass. Go Tori. Here's the blurb off Amazon:

"A timely and passionate call to action for engaging with our current political moment, from the Grammy-nominated and multiplatinum singer-songwriter and New York Times bestselling author Tori Amos.

Since the release of her first, career-defining solo album Little Earthquakes, Tori Amos has been one of the music industry’s most enduring and ingenious artists. From her unnerving depiction of sexual assault in “Me and a Gun” to her post-September 11 album, Scarlet’s Walk, to her latest album, Native Invader, her work has never shied away from intermingling the personal with the political.

Amos began playing piano as a teenager for the politically powerful at hotel bars in Washington, DC, during the formative years of the post-Goldwater and then Koch-led Libertarian and Reaganite movements. The story continues to her time as a hungry artist in Los Angeles to the subsequent three decades of her formidable music career. Amos explains how she managed to create meaningful, politically resonant work against patriarchal power structures—and how her proud declarations of feminism and her fight for the marginalized always proved to be her guiding light. She teaches us to engage with intention in this tumultuous global climate and speaks directly to supporters of #MeToo and #TimesUp, as well as young people fighting for their rights and visibility in the world.

Filled with compassionate guidance and actionable advice—and using some of the most powerful, political songs in Amos’s canon—this book is for anyone determined to steer the world back in the right direction."


Resistance isn't out until May 5th of next year -- you can pre-oder it right here -- but 2020 makes sense with it being the year of the Presidential Election... I was going to say "the most important Presidential Election of our lives" but 2016 was that and that went to shit, so now I guess technically 2020 is, if we live to make it there anyway. Ahh optimism! Save us, Tori...
.
Who? Jason Adams When? 12:35 PM