So for Halloween last night I ended up watching two scary movies -- well two and a half if you count the half of 1966's Chamber of Horrors I caught off TCM -- and one of them was Babak Anvari's Wounds with Armie Hammer & Dakota Johnson, which I'll hopefully discuss in a bit, while the second ended up being... 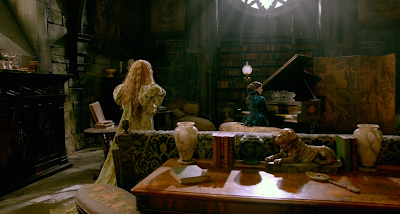 ... a re-watch of Guillermo Del Toro's gorgeously technicolor Crimson Peak, which I probably hadn't seen since 2015. (Here's an entertaining piece I wrote on it at the time.) The movie had snuck into my brain on the back of that post I did wishing Mia Wasikowska a happy birthday last week. 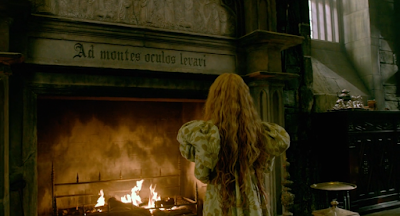 The engraving above the fireplace in the library slash music room of Allerdale Hall reads "Ad Montes Oculos Levavi" or "To the hills we raise our eyes," which -- besides being on the Coat of Arms for Cumbria where the mansion is supposed to be, as well as being taken from the Book of Psalms -- seems to me could be a subtle reference to both HP Lovecraft's At the Mountains of Madness (which Del Toro almost filmed at one point) and Clive Barker's story "In the Hills the Cities," but maybe I'm just mashing up my molehills. Whatever the case we're high up, is the point. Thin air and all. People lose their heads up there. 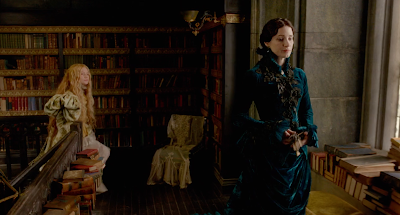 This is the second proper conversation we've seen at this point in the film between the new bride Edith (Wasikowska) and her fresh sister-in-law Lucille (Jessica Chastain), after a bonding chat involving dying butterflies, and this one seems friendly enough on the surface -- Lucille is a weirdo but she's not quite a terrifying weirdo quite yet, and her barbs aimed at her mother's stern portrait seem harmless enough. 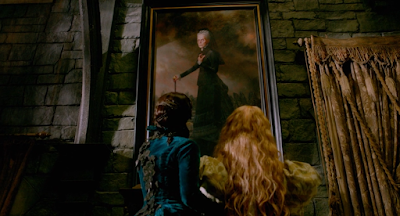 It's only later, once you think back or once you re-watch the film and you know these siblings terribly dirty secrets, that you realize what Lucille's digging at in this scene, flipping through a dirty book and pushing Edith to talk about her sex-life (or hopefully lack thereof) with Lucille's brother Thomas (Tom Hiddleston)... 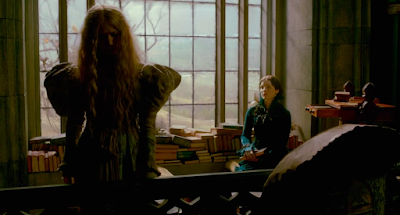