Martin: Sir? If you don't mind my asking... why a box?
Arlington: Your home is a box.
Your car is a box on wheels. You drive to work in it.
You drive home in it. You sit in your home,
staring into a box. It erodes your soul, while the box
that is your body inevitably withers... then dies. Whereupon
it is placed in the ultimate box, to slowly decompose.
Martin: It's quite depressing, if you think of it that way.
Arlington: Don't think of it that way...
think of it as a temporary state of being. 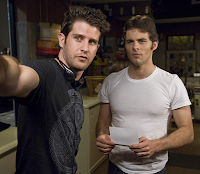 Anyway on that note a happy 10 to Richard Kelly's film The Box, which I saw ten years ago and never since. I hated it at the time but I didn't know that me hating it would stop Richard Kelly from ever making another movie ever again, so I kind of regret that hate. Plus I did get to stand a foot away from James Marsden in the flesh at the screening I attended, which I vividly remember down to the molecule here to this day. Way more than the movie, which has like... NASA? And some more wormholes? I don't know.

Ever since those whispers in September that Kelly might come out of retirement (dude is 44) to make a movie about Twilight Zone creator Rod Serling I have been thinking of doing a little Richard Kelly film-fest consisting of that whopping three-picture output of his... wow, that'd take me all of an afternoon. How could I ever manage? I don't know if it's translating onto the page but there is a lot of sarcasm dripping off this post. A lot. I'm in a mood this morning. Hopefully Frank Langella will show up at my door with half his face ripped off and make things interesting.

I still think Southland Tales is one of the most underrated films ever. I liked "The Box" and still do, but ST is the fever dream of the Donald Trump era 10 years early. The Moby Soundtrack is not from this world, and so is Miranda Richardson. And by the way, Teen Horniness is not a crime, I just wanted to point that out, am I right Buffy?

I started singing "Teen Horniness is not a crime" in the shower this past weekend, lol