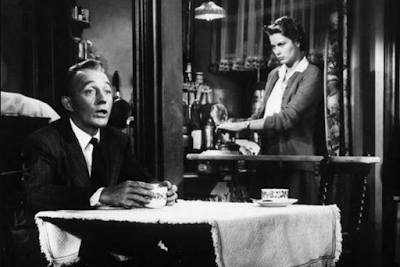 Georgie: Let's say I try my small way to help.
Bernie: That's what my ex-wife used to keep me reminding of, cheerfully. She had a theory that behind every great man there was a great woman. She also was thoroughly convinced that she was great and all I needed to qualify was guidance on her part.
Georgie: Still does not prove that the theory is completely wrong. I imagine one can go through history and find a few good examples.
Bernie: It's a pity that Leonardo da Vinci never had a wife to guide him, he might have really gotten somewhere.

Did Bing Crosby just come out? I've never seen The Country Girl, really all I know about it is that Grace Kelly stole Judy Garland's Oscar for it, and wasn't that enough of a slap in the face of every homosexual? We don't want Bing Crosby, noted child abuser, thrust upon us as well. Keep him, straights! Anyway I guess this is my way of wishing Grace Kelly a happy birthday on what would have been her 90th. I love Grace but only for her Hitchcock movies... as if three stone-cold classics (including my tied-for-favorite movie of all-time, Rear Window) can be an "only."

The irony is that The Country Girl is far and away Noted Child Abuser Bing Crosby's best performance.

I've only ever liked Grace Kelly in Rear Window.

I'll never feel that Grace should have won against Judy but it would be a slightly less bitter pill if she had won for Rear Window which was the same year and is her own peak.

Country Girl isn't terrible but it's drab and ordinary. If you've never seen it her last film, High Society is a charming sleek musical remake of The Philadelphia Story.

Actually, Bill Holden plays the "Bernie" character, and this dialogue is between Holden and Kelly. Hmmmm! I actually like The Country Girl, though I agree that Garland deserved the Oscar. It is, as Dame James said, Crosby's best dramatic role, and he's terrific in it. Would love to see the Faye Dunaway/Dick Van Dyke cable-TV remake at some point! Happy Belated Birthday, Grace Kelly!