Charlie Kaufman is Releasing a Book 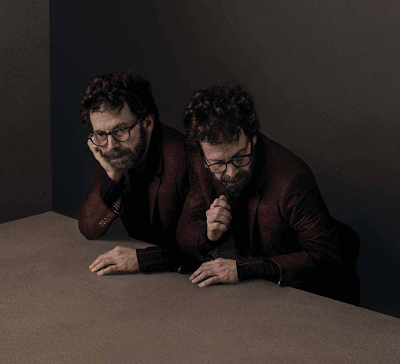 I just saw somebody talking about making a "Best Movies of the Decade" list and my first thought was Charlie Kaufman's Synecdoche New York, and my second thought was oh wait that's a 2008 movie, and then my third thought was well it's still the best movie, of any decade. Weirdly that movie popped up repeatedly in my head while watching of all things Marielle Heller's Mr. Rogers movie A Beautiful Day in the Neighborhood last night -- which I just reviewed here -- because there's a passage of dialogue from it that I've quoted here on this site several times and which seemed apt in context; here's a choice bit that was already echoing in my head today:


Anyway I was thinking all of that when whose name should immediately pop up before me in the news but Charlie Kaufman himself -- there's a scene in A Beautiful Day in the Neighborhood where that happens with the lead character; he is thinking about Mr. Rogers and Mr. Rogers appears and leads him to Mr. Rogers. So basically I'm thinking I need to re-watch Synecdoche for the thousandth time tonight, is my point. The fates demand.

To get to the actual news of it, Charlie Kaufman is indeed writing a book -- it's called Antkind and it's going to be published in May 202 and you can pre-order it right here right this second, as I have already done. Here's how it is described, and if you've seen Synecdoche you'll see the connection:

"Antkind centers on a failed film critic named B. Rosenberg who stumbles upon what may be the greatest artistic achievement in human history: a 3-month-long film, complete with scheduled sleeping, eating, and bathroom breaks, that took its reclusive auteur 90 years to complete. As Random House teases in the synopsis: “B. knows that it is his mission to show it to the rest of humanity. The only problem: The film is destroyed, leaving just a single frame from which B. must somehow attempt to recall the film that might just be the last great hope of civilization. Thus begins a mind-boggling journey through the hilarious nightmarescape of a psyche as lushly Kafkaesque as it is atrophied by the relentless spew of Twitter.”

My brain hurts just thinking about it. (In a good way.)