NewFest: And Then We Danced 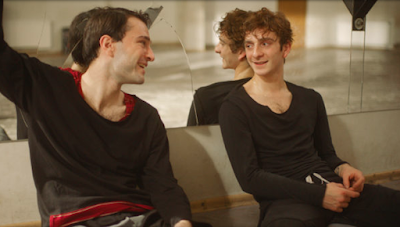 Ye Olde Witches boogy-woogy'ing around the disco pyres, Dance and Horror have been linked since time immemorial. But as of late, perhaps post-Black-Swan, it feels like we've been getting a lot more of this in the cinema than usual -- the Suspiria remake (psst here's our daily reminder you should be reading Final Girl's month-long love-fest to that flick if you're not already) and Gaspar Noé's Climax spring to mind but they're just two examples of many. In times of absurdity perhaps words fly out the window -- the only way we can express our psychoses right now is by flinging ourselves on the floors and walls a la Isabelle Adjani in Possession.

And Then We Danced, Sweden's wonderful submission for Best International Feature Film at the Oscars which just played at NewFest, is not a Horror Movie by any stretch of the imagination. It's more of a coming-of-age and a sad bad romance, a tale of a young man coming to terms with himself through love and its eventual spoil. And yet it thrums with a barely repressed tension that had me on edge from start to finish; its intentions are really elsewhere but in getting there it borrows liberally from the vibe of those other flicks (especially Aronofsky's) to place its lead character, a traditional Georgian dancer named Merab (Levan Gelbakhiani), under a vague cloud of constant danger.

Merab works as hard as any lifelong dance student we've ever seen in the movies -- his life is only practice, his friends are only dancers, and it seems to fill him from pointed finger to tippy-toe. But he keeps coming up just short, and its clear almost immediately why -- the traditional Georgian dance demands a broad-shouldered cartoon masculinity, and Merab, small and ginger slinky, is not that. When the new dancer Irakli (Bachi Valishvili) arrives and fits the manly man bill Merab, flushed with annoyance, doesn't seem to know whether he wants to fight him or fuck him. 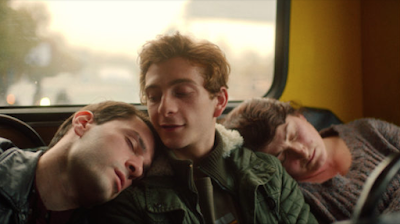 That is of course literal -- this we know even as they seem unsure is a gay romance, and Merab and Irakli keep finding excuses to touch, to rub shoulders, to brush elbows and calves and the like. Despite the competition they've been thrust into with one another they immediately hit it off, and Valishvili and Gelbakhiani let their eyes do all the talking. It's clear what's going on even in this world where what's going on is not allowed to be going on. They've got enough chemistry for the whole of Georgia, it seems.

Still that danger toils and troubles the frames of their percolating love affair, and neither seems sure how far to push anything -- those furtive nudges that all queer people know so well and wince with remembrance towards are played out here with excruciating reticence; sexual tension and the tension of a slasher film seem indistinguishable as the boys drunkenly flop through the a sparse wooded field, their first intimacies soundtracked by barking dogs and too close strangers probably ready to pounce, to prey, to prance them off to no good place.

Even like a horror villain origin myth we hear repeatedly told the fate that befell another gay dancer, who was disappeared away from the company for an overseas indiscretion -- his tale's told as if around the campfire, the woe and ruination that becomes of men who love other men. Merab and Irakli seem crushed by it -- whatever good they find in each other's arms comes slammed up there, against the centrifugal force of a society's ignorance and fear and loathing. Finding a way out of that whirlwind, that dance with the devils of love's undoing, snaps limbs -- everybody won't make it out alive. But for those who do, a survivor's grace -- Art finds meaning, and maybe exaltation, through the ringer. Love ain't always so lucky.

And Then We Danced already screened at NewFest
but will be released in theaters in January -- here's the trailer:
.
.
Who? Jason Adams When? 1:41 PM