I Just Can't Wait To Be 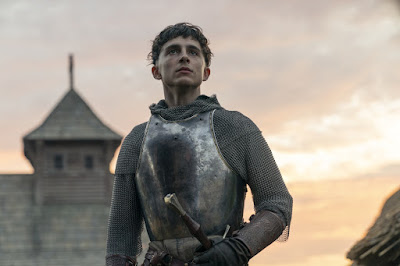 There's a phenomenally filmed battle sequence across the last act of David Michôd's The King that feels like the heaviest thing I have ever witnessed -- not "heavy" in the stoner sense but literally, physically weighted down. We see the Medieval Knights in all their tuna-can finery just slamming into each other blindly in a valley of mud, like somebody dropped a store-shelf's worth of Tin Man action figures into a washing machine.

We're used to these "gritty" sorts of action scenes at this moment in time -- well passed "used to" actually, I'm practically at the bored stage by now -- but Michôd stages it all so beautifully, with absolutely resplendent cinematography from Adam Arkapaw, that it feels fresh, it feels sparkling and surprising and alive, in ways that make most modern herky-jerky so-called action spectacles look like the blended up mish-mash that they sadly are.

And nowhere is that ballet and beauty more clear than when the film's one true knight Timothée Chalamet comes spinning through the chaos, a chainmail dervish dashing up and down in a trick single take of melee and moves -- the choices laid upon the head of the Boy King are as heavy as those armored plates, as the heels sinking thigh-high into the mud, but Chalamet makes them shine, and dance, and twinkle. We might miss the Shakespearean sonnets but Chalamet becomes the poet's words in their stead. When was the last time one of these movies wrung a tear from me as the leader led his men into battle? I cannot recall, but Timmy managed.

The film itself doesn't find anything particularly new to say about Men and War and the all that Heavy Shit -- is there anything new to say? We keep playing the same awful tunes ourselves here in the real world, seemingly never learning our lessons. But time and again The King plays the standards like the most beautiful music, like re-hearing music for the first time -- this film is like Rembrandts brought to life, like light and shadow and fire delivered to you on a lace pillow, plopped right next to the head of your most sworn enemy. It's delicious stuff. 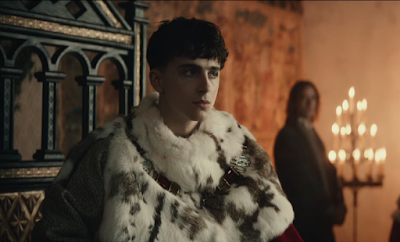 Jason--You are fortunate that you live in NYC. It now seems as though The King is not going to be screening in any cities except for NYC and LA before it streams on Netflix on November 1st. Very frustrating that most people will never be able to see it in a theatre.

Really? Dammit Netflix. Well try to watch it on the biggest screen in your house you can find, everyone -- it's SO PRETTY