He: Acorns don't cry, you know that as well as I do.
That's what fear is, thoughts distort reality.
Not the other way around.

A happy 10 to what we thought would be Lars von Trier's most epic love poem to depression -- who'd have known that two years later he'd have Kirsten Dunst's sadness become so magnetic that it pulled a planet out of the sky right onto our heads, or that four years later he'd release a two part magnum opus devoted to the sight of Charlotte Gainsbourg getting sexually abused by sweet little Jamie Bell, or that nine years later he'd set up a series of comic interludes involving Matt Dillon, movie star of the 1980s, slicing up Elvis Presley's grand-daughter? Oh Lars, you devil. 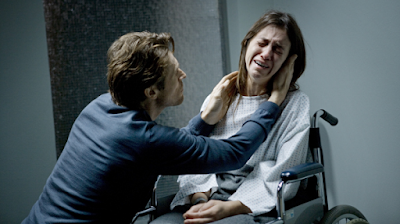 In all seriousness though LVT remains, for all his eye-jabbing provocation, one of my favorite movie artists, and I think Antichrist is absolutely gorgeous and scarring and perfect in its own over-the-top  traumatic way. And with Willem Dafoe giving the performance of the year here in 2019...
.

Willem Dafoe gives (give or take Elisabeth Moss in Her Smell) the performance of the year in The Lighthouse. He sells a speech at the film's midpoint so soaked in purple prose no mere mortal could deliver it and he delivers it like gangbusters, thereby proving DAFOE IS GOD NOW https://t.co/477bqHQK7n
— His Name Was Jason Adams (@JAMNPP) October 21, 2019

.
... I think it's also important to look back upon the decade this man has had just bug our collective eyes out in awe. Is any actor taking the risks, the real risks, that he is? Not just like taking a break from eating lunch to skinny himself down or rolling around in cow innards for an Oscar like some actors who get called risk-takers -- please point me in the direction of another person with a filmography this decade that includes the giant swings from Antichrist to Fantastic Mr. Fox to Nymphomaniac to Pasolini to John Wick to Finding Dory to The Florida Project to Aquaman to The Lighthouse?

And keep in mind for brevity's sake I skipped dozens of titles there, and these are just from the last decade without even diving back to his work with Lynch and Scorsese and on and on. As you can maybe tell this is just the front tip of the Awards Season spear of my proselytizing pro-Willem, so get ready for plenty such -- I warn ye!