A good chunk of the first act of Brian De Palma's 1973 flick Sisters revolves around a cake. Philip (Lisle Wilson) hooks up with a girl he meets through outlandish circumstances (it involves a prank television show) and overhears it's her birthday...

... so while he runs out for an errand for her (that involves medication) he on the sly picks up a birthday cake and brings it back to her apartment to surprise her. Unfortunately for sweet Philip he's the one that gets the surprise.

What's meant to be an act of kindness, of sweetness, is turned rotten by the ol' switcheroo -- the fact that Philip met this girl via a prank television show has already set up he's the oblivious type but this is the sort of prank that nobody sees coming and that nobody's laughing at. And now I have to break this sequence down into individual  shots because this is some prime stuff from De Palma:

The scene before this section was long and drawn out in order to lull us into that sweet sense of false security, and then boom Margot Kidder comes bursting out from under the blankets and all hell breaks loose. I love the shot of the not the knife itself but the knife's shadow passing over the birthday cake and blowing out the candles as it does -- and then the reverse as it's pulled back.

Like the "Shower Scene" in Psycho (sorry but all critics are contractually obliged to bring up Hitchcock while talking about De Palma) BDP wants us to follow the movement of that knife and the action through his edits...

Cause and effect though cuts. The gag here of course is the literalization of "cuts" -- what Hitch and De Palma have done is inextricably link the actual process of film-making with violence in the telling of their violent stories. It drags us into this and it implicates us as we watch. We made this happen too. We wanted our cake, and now we gotta eat it.

One of my favorite films of DePalma's. The split screen sequence that follows in terrific and the whole film is capped of with a Bernard Herrmann Score.I have been an ardent fan since Carrie which I dragged friend after friend to see when it first opened. 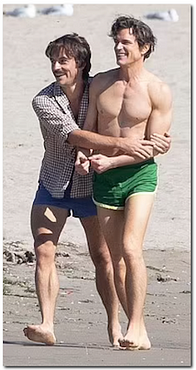