The Void Is Calling

For a place dubbed the "final frontier" there's been nothing final about outer space -- we might not get up there as often as our counterparts in the 1960s thought we would be getting by now but story-wise, well the number of stories we've squeezed out of the stars is as infinite as they are. This Friday comes the latest, James Gray's Ad Astra, which has slapped this year's moon-belt onto the lithe middle-aged hips of the movie star Brad Pitt -- how's he fare, up there up there?

Well not counting for nothing Ad Astra is as beautiful to look at as Brad Pitt is -- the film imagines the intergalactic upstairs in many a hushed and minor key, which struck me as a lovely route to take, fitting in soundly with its small scale tale... as small scale as it gets when the entirety of humanity is on the line, anyway. Besides one boundless excursion across the moon's craggy surface Gray keeps his camera trained more on the crags of that movie star's face. This year's been all about coming to terms with Brad Pitt, the middle aged one, and this film's fascinated by his newfangled nooks and crannies, especially as he stares still like into stillness -- it's not a totally terrible place to train one's gaze for a couple of hours.

So far the past couple of weeks at the multiplex have been testing me with movies taking stories I don't usually glom towards and doing their darndest to get me sticky with their mess -- when I (positively) reviewed Hustlers last week I had to admit I don't really get a lot out of "get rich or die trying" fantasies that love to soak themselves in a wealth fetish, and now Ad Astra's here to push my "daddy issues" buttons, which I have even less patience for. On this tip it's Hustlers that's the more successful of the duo -- I gotta admit spent the last act of Ad Astra stone cold, emotionally speaking, cold as any strange old body tossed out the airlock.

Nary an emotive wince did Ad Astra wring from me with its tale of paternal woes writ interplanetary. Not a tear was jerked -- they all froze in their ducts like ice. Am I the cold one? Probably! I've heard tales told of people finding this film affecting -- devastating even? But I seem to have been left back at the Moon Base, scratching my eyes in the beautiful golden light cascading off the nearest star. (PS her name is Ruth Negga.) I just didn't feel much of anything, save an appreciative surface level something. And that seems to be where I stand on James Gray in general? I don't even know if he and I speak the same language at this point. I'm guess the alien this go around. 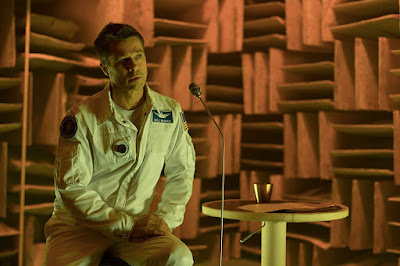 I love in general James Gray, so Ad Astra is very anticipated for me. I appreciate the fact that despite it seems a Brad Show you have kind words for enchanting Ruth

She is not in it NEARLY enough and I more wanted to watch the movie about her character, to be honest!

I love that your writing includes actual personal connection to a piece of art instead of an entirely sagacious view. Keep it up!

I agree regarding Gray, whose films are always beautiful to look at and easy to admire but end up leaving me uninterested. The more I’ve cared about his characters was in Two Lovers. Something about a smaller scale and the performances.

Lucky -- "Admire" is the perfect word, because I find the experience of watching them not unpleasant, they are certainly well-made; they just have yet to communicate to me on any deeper level than a surface one.

You hit it right on the head Jason; it IS a cold movie, which is weird considering it sort of wants us to go warm and gooey at the end. I was so baffled watching this. There's so much that doesn't make any logical sense from a narrative point of view (all that monkey business, the water tunnels, etc) and you could tell the film wants to be thought of as "Gravity" or "Interstellar" but both of those had characters capable of human emotion.

I watched this on a plane the other day and really really liked it. Gorgeous film. It's Gravity with daddy issues. thumbs up.