It Isn't Just a State of Mind 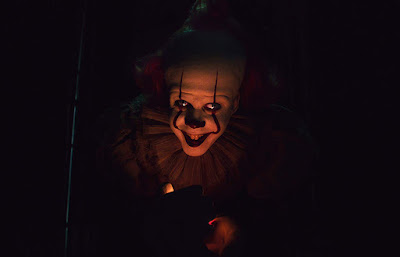 Derry is one rotten town. Something has seeped into the ground water, from deep within the earth, and poisoned every houseplant and kindergarten teacher alike. These are the sort of people will turn their head when a young man gets murdered -- they'll scowl at you, and they'll turn off their porch lights when they hear screams. And behind those closed doors -- forget it. Every kid living in their own personal nightmare, reborn every morning and evening and in between anew.

That's what Stephen King's book It is about anyway, but you won't get any sense of that in the second film, the one titled It: Chapter Two that's out in theaters this week -- what you get instead is a bunch of good actors trapped in a series of mirrored magic boxes, tripping from set-piece to screaming set-piece, without any sense of overarching theme. Without a sense of place or history.

It is all about place and history. It's about home, home gone to seed -- weedy patches of sidewalks and clogged sewer pipes, rock quarries where bullies wait with bloody noses. It's about that feeling where you spent all day feeling like shit in school because you're neither the best nor the brightest and you've got no friends, but heading home offers no comfort -- every street corner along the way might bring a foot out to trip you, a slur flung your way. 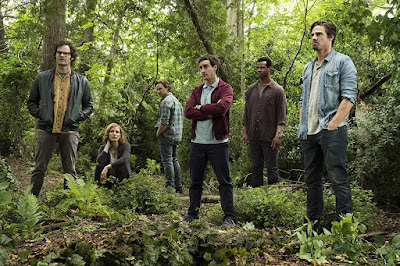 And then you stand on your doorstep and you don't want to go in. Inside that door there's a mother who smothers you, there's a father who drinks and yanks your shoulder out of its socket. There's a small room buried in one corner, one pocket of temporary relief, but now under the pillow lurks a clown, or a werewolf, or a mummy -- gnarled fingertips curl around the pillowcase as you attempt sleep, whispering it's better nowhere, little boy or girl, come with us to nowhere and nothing, you're nothing.

It is about the helplessness of childhood, and even scarier It is about the feeling all these years later that you're still nothing, nothing but that scared little boy or girl every time you lay down to bed at night. That a word or an image, the sound of a slamming door or an angry man on the sidewalk, can trigger it all back, rendering you small and useless all over again. That everything we've made of ourselves is just a silkscreen standing in front of a bottomless abyss.

It: Chapter 2 isn't really about any of those things, save in spurts and fits. It's mainly an excuse to rush from one room to another room throwing candy and barf at our faces in equal measure. It's a carnival ride spinning out of control really, and I wasn't sure anybody was manning the brakes. Occasionally Bill Skarsgård would pop up and work his magic -- he's so marvelously good as Pennywise it really does defy logic -- but there's even less of him here than there was in the first film. Most of It: Chapter Two is spent straining its adult actors towards the chemistry of the kids, without a lot of success.

And so they drop them into wilder and bigger pop-up shenanigans, with mangled puppies and Thing head spiders and ever bigger balloons. Everybody gets to be an Action Hero if they live long enough is apparently our lesson, although I have to admit that hasn't been my own personal life experience. I feel closer to the old man with the accent selling rusted bikes in town, sitting there waiting for a few nickels to roll in but rather hoping the bell doesn't ring at all today. 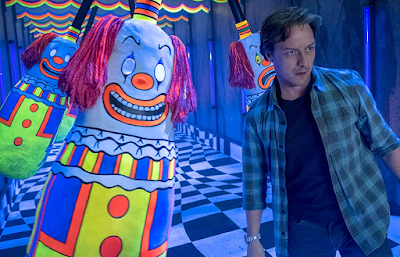 I think I liked it more than you, but there were a lot of things from the book that I missed, like Bill’s triumphant bike ride with Bevvat the end. IT 2 was hollow, but a pretty hollow? I guess?

There are more things I liked than I got across in this review -- Bill Hader and James Ransone were actually very good -- but it just felt SO empty and devoid of what makes IT King's best book. And it actually seemed like the film had very little interest in being about any of that too, which was the most offensive thing about it to me. It paid no attention to the townspeople -- there were all these generic shots of Prescription Advertisement People walking around Derry happily in town shots, like wtf?

In the last 30 pages the book crashes and burns... badly, so I'd have to disagree with you about IT being his best book...

Just saw it this weekend-like you, I was disappointed by how little the film did with Derry the town. I have a slightly different take on that-I agree with all you said about Derry's effect on the Loser's. But to me, what they really missed was the idea that Derry itself was SICK. That is the major theme of It to me, or at least part of it. It's made expressly clear in the book that everyone in this town KNOWS, on some level, of It's existence, the child murders, the 27 year cycle, etc. and turns a blind eye to the stinking rot at the center of their town because the town itself is sick. There's that key scene where I think it's Bev that the bullies are closing in on-three brutal teen boys going after a girl alone, and a neighbor sees it and just turns around and goes inside. That's what I think It is about-or at least one thing It is about-the ability of society to ignore blatant evil in the name of maintaining a status quo. And given current events, let's just say that's on my mind, a LOT.

They also could have done SO much more with the gay bashing scene-brutal and well acted as it was, they skipped all the aftermath in the book with the homophobic cops who don't give a shit that this fag just watched his lover violently murdered, that other people heard the attack and didn't try to help...they missed all of that in the name of showing some scary writing and balloons.

Still, I'm much more positive overall about the film than you are. I thought the performances-Bill Hader and Bill Skarsgard especially-were outstanding and the movie delivered on both the horror and the emotion. I believed in these people and their reactions, and I was sold on the relationships and the power of their friendship.