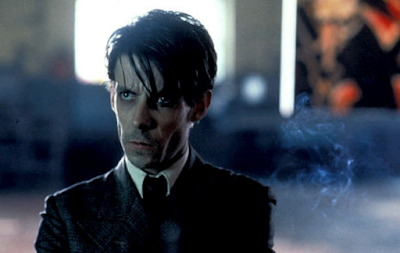 Adolf Hitler: Genius and happiness go
together as well as cheese and chalk.

Wouldn't it be weird to be typecast as Adolph Hitler? I think that'd probably be weird. Not that the actor Noah Taylor (who is turning 50 today) has been exactly typecast -- he's had a long varied career, and only played Hitler twice. But twice is... more than once, ya know. (I imagine that Damon Herriman, who's been tasked with playing Charles Manson twice this year, feels much the same.) I've never seen Max, the 2002 movie about a young Hitler's "freundschaft" with a Jewish art dealer (played by John Cusack) but I have of course seen Preacher, the Dominic Cooper television series which has Noah taking... 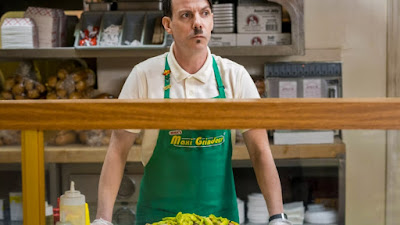 ... a decidedly wackier stance on the Führer, and Noah is really really really smashing in the part. I actually think of his performance every time I see the trailer for Jojo Rabbit (we just shared that yesterday) with Taika Waititi giving the mass murderer the same satirical ridicule. More ridiculing of Nazis please! Never too much. Claws had a very funny subplot that took aim at lame-ass so-called "Proud Boys" with their flaccid little tiki torches this year too.

Anyway speaking of Preacher here and now is where I sadly admit I totally missed, much to my deep and abiding shame, that its fourth and final season had started airing episodes already, and for several weeks at that. How dare I! I have some God-Damned catching up to do! I'm coming, Dom...
.
Who? Jason Adams When? 11:51 AM