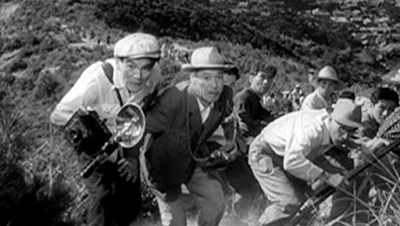 Kyohei Yamane-hakase: I can't believe that Godzilla was the only surviving member of its species…But if we continue conducting nuclear tests, it's possible that another Godzilla might appear somewhere in the world again.

Did y'all catch the news several weeks back that Criterion is releasing a ridiculously comprehensive boxed-set of the "Showa Era" Godzilla movies? Meaning fifteen films that stretch from the original film in 1954 all the way up to Terror of Mechagodzilla in 1975.

Twenty years and countless monsters, all gathered up in Criterion's typically meticulous, glorious way. The set is released on October 29th, just in time for a Halloween marathon, and this week they released a trailer for the set which has got my gooses good and pimpled. Watch:
.
.

I'll share the whole shebang of outlandishly awesome specs
for the great big monstrous set for you right here after the break...

In 1954, an enormous beast clawed its way out of the sea, destroying everything in its path—and changing movies forever. The arresting original Godzilla soon gave rise to an entire monster-movie genre (kaiju eiga), but the King of the Monsters continued to reign supreme: in fourteen fiercely entertaining sequels over the next two decades, Godzilla defended its throne against a host of other formidable creatures, transforming from a terrifying symbol of nuclear annihilation into a benevolent (if still belligerent) Earth protector. Collected here for the first time are all fifteen Godzilla films of Japan’s Showa era, in a landmark set showcasing the technical wizardry, fantastical storytelling, and indomitable international appeal that established the most iconic giant monster the cinema has ever seen.
EIGHT-BLU-RAY SPECIAL EDITION COLLECTOR’S SET FEATURES
• High-definition digital transfers of all fifteen Godzilla films made between 1954 and 1975, released together for the first time, with uncompressed monaural soundtracks
• High-definition digital transfer of Godzilla, King of the Monsters (1956), the U.S.-release version of Godzilla
• Japanese-release version of King Kong vs. Godzilla from 1962
• Audio commentaries from 2011 on Godzilla and Godzilla, King of the Monsters featuring film historian David Kalat
• International English-language dub tracks for Invasion of Astro-Monster, Son of Godzilla, Destroy All Monsters, Godzilla vs. Megalon, Godzilla vs. Mechagodzilla, and Terror of Mechagodzilla
• Directors Guild of Japan interview with director Ishiro Honda, conducted by director Yoshimitsu Banno in 1990
• Programs detailing the creation of Godzilla’s special effects and unused effects sequences from Toho releases including Destroy All Monsters
• New interview with filmmaker Alex Cox about his admiration for the Showa-era Godzilla films
• New and archival interviews with cast and crew members, including actors Bin Furuya, Tsugutoshi Komada, Haruo Nakajima, and Akira Takarada; composer Akira Ifukube; and effects technicians Yoshio Irie and Eizo Kaimai
• Interview with critic Tadao Sato from 2011
• Illustrated audio essay from 2011 about the real-life tragedy that inspired Godzilla
• New English subtitle translations
• Trailers
• PLUS: A lavishly illustrated deluxe hardcover book featuring an essay by cinema historian Steve Ryfle, notes on the films by cinema historian Ed Godziszewski, and new illustrations by Arthur Adams, Sophie Campbell, Becky Cloonan, Jorge Coelho, Geof Darrow, Simon Gane, Robert Goodin, Benjamin Marra, Monarobot, Takashi Okazaki, Angela Rizza, Yuko Shimizu, Bill Sienkiewicz, Katsuya Terada, Ronald Wimberly, and Chris Wisnia