Some Things Wicked This Way Come 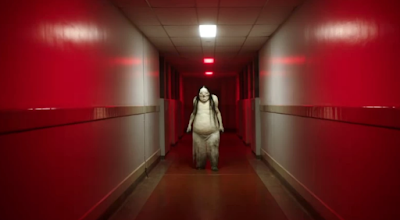 I thought of that red woman while watching Scary Stories to Tell in the Dark, André Øvredal's boisterously old-fashioned and delightfully deranged adaptation of Alvin Schwartz's classic 1980s kid's horror books (and even more importantly Stephen Gammell's classic nightmare illustrations) -- I would have been having that nightmare right around the time I would've been reading Schwartz's books and soaking in those horrific illustrations -- which came first, my red lady or theirs?

Who knows, but Øvredal captures that feeling of being a ten-year-old kid way way way in over my head just right -- it's not hard to say that these books (along with the orange covered Crestwood Monsters series of course) were responsible for bending (some would say warping) my brain towards the spooky side of the spectrum, and I feel delighted to report that this movie feels like it might do the same for some more impressionable ten-year-olds out there, just waiting for the spark. I mean there's a scene in here that entirely undid me, here in 2019, as a sort-of adult person. (It's the pale lady. Of course it's the pale lady.) This is some good gateway shit!

But beyond just being about the fun scary things that go Goosebumps in the night, Øvredal and his writers (and producer Guillermo Del Toro, I have little doubt) also manage to make a cage for this beasty that feels important and timely -- the Small Town America of 1968 that they present is on the verge of shattering apart, street posters marked up with swastikas and teenage boys getting shipped home in body bags; it's a place where a dark cloud has already settled down, boarded up the exists, and begun poisoning the ground. It's a surprisingly self-possessed little tale of Americana gone to seed -- a Bradburyian circus of haints and hags and autumnal perversions making themselves home, getting themselves comfortable, even after the All Hallows parade has marched itself on. Horror, with all its limbs and faces, fits right in here, this sea to sea burial ground. 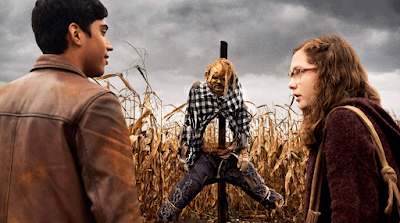 Oh, the Crestwood books, the Crestwood books! I checked 'em out in a steady rotation through most of my childhood, and every library in eastern Montana had them! I finally picked up DRACULA (my favorite), and THE WOLF MAN (close runner up) back in the early 2000s; now I see they're supah dupah expensive.

I bought them all about ten years ago! I realized they were only going to go up too, they were only getting more expensive even then. They all have a prime shelf in my house.