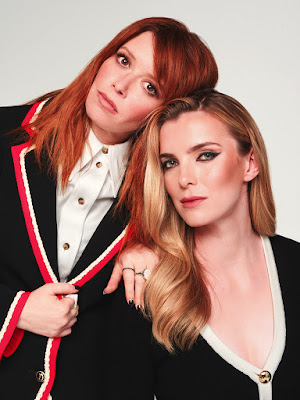 "I think that I knew from an early age that it seemed to be my job as a girl going into a woman to run at this Grace Kelly smoke and mirrors version of myself. But I knew I was going to have this haggard witch, Emily Dickinson monster snapping at my ankles all the while, and if I stopped for one second, that person’s going to eat me and take over and I’ll eat Special K inside forever and stop running at whatever it is I’m running at. And I think I’m realizing that I found a profession where I can stop and let that Emily Dickinson monster drive or take the microphone or channel her into something, and it’s so much more interesting than the porny Grace Kelly person that I’d been told I had to try to pretend to be. And I think for a long time, female roles were — and sometimes still — live in smoke and mirrors, and we have to muffle our inner haggardness and witchiness. But stories are just so much richer and more interesting when we’re giving that part of ourselves the microphone and pen and paper. I think in the pursuit of my career and health insurance and running from that demon snapping at my ankles, I forgot that the reason I became an actor was communion and to crack open my ribs and have the scariest, smallest, weirdest part of my soul maybe find a mirror in someone else’s. And that requires stopping and not running and hiding."

That gif reminds me how much I fell in love with Gayle Rankin during this season of GLOW. Not that she wasn't good in the first two seasons or in Her Smell, but this season really let her shine IMO.

I am bummed that we are missing out on the experience of the great Gilpin kicking Oscar - winner Hillary Swank's high-heeled behind in "The Hunt." That looked like a star-making performance for those who haven't seen her in "Glow." Gilpin looked like a "final girl" for the ages in the trailer.