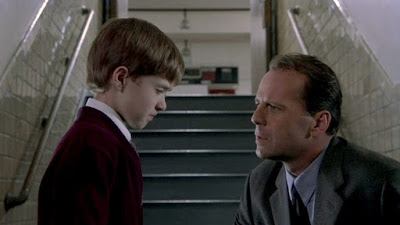 Malcolm: Do you know what "Yo no quiero morir"
means? It's Spanish. It means "I don't want to die."
What do you think these ghosts want when they talk
to you? I want you to think about it, Cole.
I want you to think about it really carefully.
Cole: Just help.
Malcolm: That's right. That's what I think too.
They just want help, even the scary ones.
I think I might know a way to make them go away.
Cole: How?
Malcolm: Listen to them.
Cole: What if they don't want help? What if they're
just angry and they just want to hurt somebody?
Malcolm: I don't think that's the way it works.
Cole: How do you know for sure?

M. Night Shyamalan's now classic ghost story came out twenty years ago today. I thought the film was overrated for a very long time (besides Toni Collette's astonishing work of course -- that could never be overrated) but I've come to terms with its canonical place by now. I still think Signs is Shyamalan's best film (Mel Gibson be damned) but I'd rank this as his second best, I think. Where do you all stand on The Sixth Sense?

I remember seeing The Sixth Sense and thinking that Toni Collette was an extraordinary actor and was a shoe in for an Oscar nom. Even as a kid I knew my shit hahaha I even saw big things for a fresh faced actress named Amy Adams when I first saw Junebug. But enough of me bragging, lets brag some more about Toni. How good does she look in the trailers for Netflix’s Unbelievable and Knives Out!
Can’t wait for both of them to come out.

The scene for that last photo of Collete as Osment's mother:

Cole Sear: [about his grandmother] She wanted me to tell you...
Lynn Sear: Cole, please stop...
Cole Sear: She wanted me to tell you she saw you dance. She said, when you were little, you and her had a fight, right before your dance recital. You thought she didn't come see you dance. She did. She hid in the back so you wouldn't see. She said you were like an angel. She said you came to the place where they buried her. Asked her a question? She said the answer is... "Every day." What did you ask?
Lynn Sear: [Crying] "Do I make her proud?".

I'm so glad there's another "Signs" fan out there. It's a great showcase of Shyamalan's strengths: child actors, the blend of horror & humor, and a creeping sense of claustrophobic dread. I also dig "The Village." Sure, the twists are goofy but for my money they both make more sense than the "Sixth Sense" twist. People love to crap on Shyamalan and then turn around and complain about no original ideas in horror today. He misses sometimes but at least he's trying! "The Visit" was boss, I thought.

I think it's by far the best thing he's done - and yeah, that scene in the car is amazing and affecting. But then I'm not a fan of his, generally, so maybe those who're more into him would have other favorites. I kind of wonder what the current critical consensus is on Unbreakable. That's risen over time, hasn't it? I think parts of it work very, very well - but as a whole I'm still iffy on the totality of it.

Sixth Sense. That's the whole list.
(I don't understand how he got funded for the mermaid movie or how anything after that was green lighted.)
Deciding what is best in a pile of junk is a waste of time.

Trying to rank the best jewel in a pile of treasures is equally silly, but all the same-- how do you rank the performances of Toni Collette from Unforgettable to Fabulous to Delightful (only Cosi fails to make the grade).

The Sixth Sense haunted me for months after I saw it, because I've seen some dead people myself and because others have. I think it's a great movie. I love Toni Collette in just about anything she does, but I really enjoyed The United States of Tara.