Out of the Ruins, a Reckoning 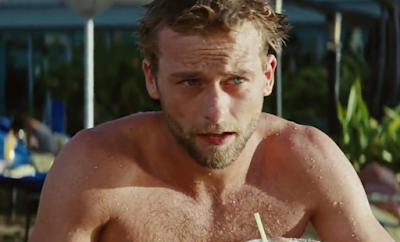 Carter Smith's 2008 horror flick The Ruins has been on my brain a lot lately, and I've been meaning to carve out the time for a re-watch -- the film is super cheap on blu-ray not to mention streaming on Amazon so I really don't have an excuse not to! Every time I see Jonathan Tucker or Jena Malone or the real (eventual) subject of today's post the actor Joe Anderson, seen above, I think of this film and how it got, pardon the pun given the film's nature, under my skin.

Anyway The Ruins aside I did indeed read Joe Anderson's name this morning and it's for something we want to will into being, hence being here yammering about it -- director Neil Marshall, fresh off the steaming pile of his flop Hellboy remake... and listen, Hellboy flopped for a reason....
.

There are theoretically worse movies that have been made and that I have sat through, but the problem with Hellboy is I love too many people involved with making it, it's too embarrassing, it makes you cringe, you have to avert your eyes like your bff just puked on his date
— Jason Adams (@JAMNPP) July 10, 2019

.
Not that crap doesn't often succeed (look at this past weekend's big winner for proof of that sad hard fact) but I think it's best that everybody just forget that movie happened. Anyway Neil is working on a new movie, and given the strength of his not-Hellboy track record -- The Descent, Dog Soldiers, Doomsday, some smashingly good episodes of Game of Thrones -- I want him to make another damned movie! So let's talk about it.

It's called The Reckoning and it's set during "the witch hunts and the great plague in England in 1665" and it's about a woman accused of witchcraft by a spurned man who actually begins to dally with the devil. Joe Anderson's role sounds small (I don't want to spoil it but that link above does if you need to know) but he got me thinking about The Ruins and yadda yadda here we are. Let Neil Marshall make another movie, please!
.
Who? Jason Adams When? 11:16 AM