I can vividly recall the first time I said the word "fuck" out loud. I was sixteen years old and my best (and only) friend was doing her damndest to snap me out of my ultra-religious upbringing and scoot me on into the sweet filth-mindedness of the secular 90s, from which I'd remained somewhat cloistered. The word felt like sawdust in my throat, dry, I coughed it out unsure how it would sound. My friend laughed violently at me. It felt like the beginning of my life.

Racela does laugh at the innocence and naïveté of these kids, but it's the good-natured sort that only could come from somebody who's been there and cringed thinking back upon it. He's also fluent in the way our kinky thoughts get twisted up into even kinkier ones thanks to that great old sexual steam engine called Repression, which this horror flick externalizes a la an on point Buffy episode into a saucy succubus set to feast upon their tasty unspoilt loins, naturally born out of the reels of a dirty movie the kids find buried in the theater's basement. 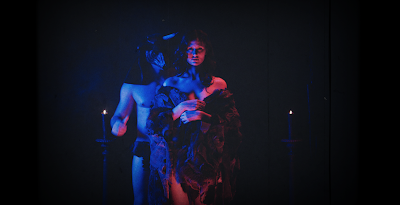 Three incredible posts, bang bang bang. just paste in my previous praise of your great writing. but what especially jumps out at me about these reviews is what a gift they are to the filmmakers. everything good takes blood, sweat and tears, and reviews like these are part of the payoff. Once again, kudos (x3).

(o/t), and possibly not your topic, but have you watched any of brian jordan alvarez’ shorts on youtube? i feel like he has a nichols/may thing going with his frequent co-star, Stephanie Koenig, and he himself seems another species of wonderful. the five part series caleb gallo is especially perfect, especially the car scenes.