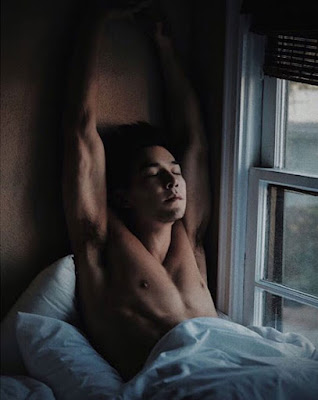 (via) Have we all watched the first episode of the new season of Black Mirror on Netflix, the one titled "" yet? If you haven't avert your eyes, I'm bout to get up in it. It stars Anthony Mackie and Yahya Abdul-Mateen II, aka Falcon from the Marvel superhero movies and Black Manta from the DC superhero movies, as best buds from way back who find a new way to, uhh, appreciate one another inside a virtual reality game. I've only vaguely noticed some downbeat reactions to the new season on Twitter so I'm not sure where people stand really but I personally thought this was a terrific hour of storytelling -- surprising and funny and way more hot than I would've thought at first glance, and a lot of that heat came from seeing dude up top, Ludi Lin aka a former Power Ranger (class of Dacre Montgomery's), treated like a right proper piece of meat. This episode was built for any of us who've ever wanted to yank down the waist of the pants the Mortal Kombat character we're playing, and I imagine we are legion.

Yeah, all I heard were negative stuff about the new season so I had low expectations from the get go. And yet with this first episode... we got two hot men trying to figure out their attraction to each other. And Ludi Lin look FOINE AS HELL. So I was all in.

Next episode stars Andrew Scott by the way and other than PERHAPS needing to be 20 minutes shorter, it's also good. At the very least it's another acting masterclass from him so it's worth it.

I really liked this episode and found that, in the end, it embraced a real queer dynamic. The Miley Cyrus episode is brain-curdling awful

Sure, this isn’t the best season ever, but these are good solid episodes. I liked all three of them, and the sight of Mylie Cyrus swearing like a sailor and then singing Head Like A Hole was worth price of admission.