The Prince of Puke and His Loyal Subject 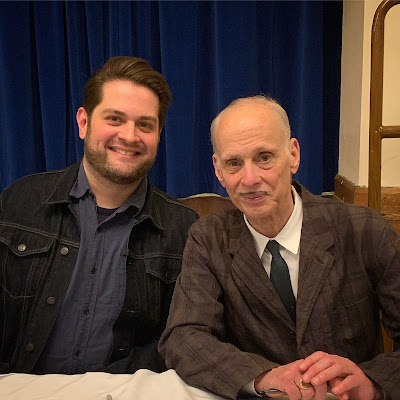 I was going to say "So I got to meet one of my idols last night" but really I met THE idol, the one -- Vincent Price is dead and this is the next greatest thing. (Along with now being on Paul Reubens' Christmas card list I have lived my life, yo.) John was in town (I can call him John know since we're besties) for his book tour, his latest one that I've told you about several times called Mr. Know-It-All being on stands now, and last night he spoke at St. Joseph's College in Brooklyn. (A Catholic School! What could be better?) Here's a brief video I took where he talks about the idea of "Camp" (with a bonus swipe at Paul Verhoeven and Showgirls!) which is now on everybody's tongues because of the recent Met Gala...
.


.
During the Q&A John admitted he wasn't invited to the Gala, which really is a repulsive oversight on their part -- can you imagine? I've been to see the show and there isn't even a single piece of John Waters filmography, not a single dress worn by Divine, in the entire exhibit. They should be ashamed of themselves. I've honestly been thinking about picketing out in front (I'm not even joking). 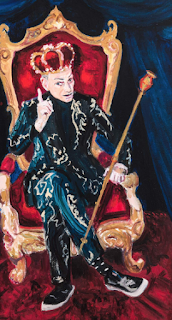 John generously mentioned he does have a piece in the permanent collection of The Met, and that if he had been invited the the Gala he wasn't sure what he'd have worn anyway since dressing up in costumes isn't really his thing, and he'd have ended up unforgivably being a "stick in the mud." But come on, he could've worn exactly what he's wearing on the cover of his book. Something kingly fit for the rightful King of Camp.

Oh and when I got my scratch-and-sniff card from Polyester signed by him he mentioned what I think might be a bit of news -- he let it slip that Criterion is currently figuring out how to make those smell cards, which means in the near future Criterion is either releasing Polyester on its own... or possibly they're releasing a boxed set of Waters' films! They have recently released both Female Trouble and Multiple Maniacs so it doesn't surprise me they're doing more, but Polyester wasn't the one I figured would be next and that has me wondering if they might not do a boxed set. Pray to the devils, my friends! Here's one more vid whilst I continue floating on air...
.

He revealed sometime last year that Criterion was working on releasing POLYESTER in 2019 and that regretfully Warner Bros will be doing PINK FLAMINGOS.

What did he say that implied a boxset? Or is that just speculation?

It was just speculation, although I barely remember what he said to me in the moment to be honest since I was dizzy; I don't know why I went away with that thought in my head exactly, if it was just wishful thinking or what

Dang, you are handsome! Great pic

Polyester was a Criterion laser disc release... a very long time ago. I regret getting rid of mine... but I no longer have a player.
Hopefully all the supplements will be included... with new stuff!!