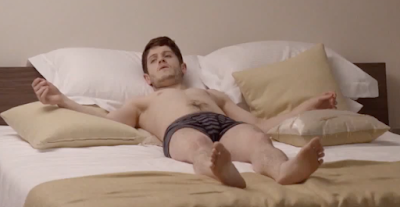 I've had Iwan Rheon on my brain ever since Sansa gave her controversial little "hooray for rape" speech on Game of Thrones last week, mostly because I had to re-explain who the hell Ramsey was to the boyfriend, which is how I spend about 50% of every episode. Anyway when I saw it was Rheon's birthday today I thought I might check in with him, since it's been awhile (you should definitely check out our archives on him though because per our usual routine with horrific villains we were totally into him while he was in the process of being horrible).

I guess he was on that Inhumans show that I never bothered with? And he was in that Motley Cru bio-pic called The Dirt for Netflix, that also starred Douglas Booth, which I also haven't watched. Any of this stuff worth checking out? Anyway a happy birthday to Iwan and here after the jump are a few more gifs from his, uhh, premature appearance on the show Secret Diary of a Call Girl...

Labels: A Song of Ice and Fire, Anatomy IN a Scene, Douglas Booth, gratuitous, Iwan Rheon

He was Ramsey Bolton on Inhumans, basically. Not worth trying to hunt down, despite Anson Mount in tight clothes.

he was also fun as the innocent neighbor boy in the BBC's/PBS "Vicious".

Absolutely. He is beyond adorable in Vicious which is deliciously...well vicious with two great British Actors having the campy time of their lives.

The Dirt turned out being better than Bohemian Rhapsody (which, probably, wasn't that big an achievement).