Gay Love Yourself, From Sufjan 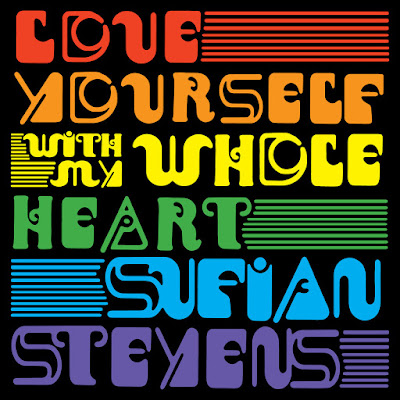 I don't know if we're ever going to get an official "coming out" statement from Sufjan Stevens but do we really need one at this point? I mean I think it's a little lame that he avoids the subject of any people in his personal life, of any gender, in interviews -- you really have got to go out of your way to do that, to talk at length to another person (meaning an interviewer) and not mention anything personal of that sort, ever. It sounds exhausting. 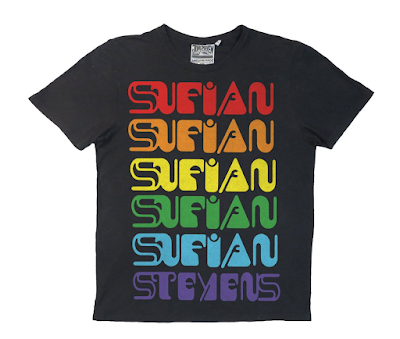 That said he expresses this side of himself pretty openly in his actual music and maybe that is enough. On that note Sufjan just dropped two songs for Pride Month today -- one called "Love Yourself" and one called "With My Whole Heart" -- you can buy them here. And he also designed a rainbow-colored Sufjan t-shirt, which you see above, and which you can buy right here.

I spent about an hour this morning trying to get my order to go through (it just did!) so I haven't had a chance to listen to the music yet -- maybe it's just Sufjan singing "I'm gay / gay as the hills / the hills that Oliver fucked Elio in" -- we'll see. Here's a bit from the site:

"In celebration of Pride Month, Sufjan Stevens is releasing two new songs on the topic of love: “Love Yourself” and “With My Whole Heart,” available on limited-edition 7” vinyl and on all digital platforms May 29, 2019. “Love Yourself” is based on a sketch Sufjan wrote 20 years ago. The original 4-track demo he recorded in 1996 is included as well as a short instrumental reprise. “With My Whole Heart” is a completely new song that Sufjan wrote as a personal challenge to “write an upbeat and sincere love song without conflict, anxiety, or self-deprecation.” Sufjan also designed a new Gay Pride T-shirt that is available on his new merchandizing platform Sufjamz. A portion of the proceeds from this project will support two organizations that offer help for LGBTQ+ homeless kids in America—the Ali Forney Center in Harlem, NY, and the Ruth Ellis Center in Detroit, MI. Limited edition 7-inch available June 28th."