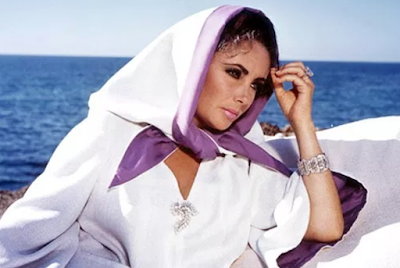 Sissy: Has it ever occurred to you that life is
all memory? Except for each present moment
that goes by so quickly you can hardly catch it?

Ahh the wisdom of crocodiles... that is to say I mean Liz Taylor. The wisdom of Liz. Not far off from a crocodile, though -- both with tough skin and make a great bag. Anyway I told you a few weeks back that the fine folks at Shout Factory! were gracing us with a foursome of camp classics on blu-ray for the first time for our Gay Pride festivities, and today the first two of those discs are hitting -- Boom! here's one of them and the other is the 1995 drag-opus To Wong Foo et cetera, you can buy that here. And in two weeks the other half of our fourgy -- the gay rom-com Jeffrey with Steven Weber and the best gem of this bunch the Village People musical Can't Stop the Music  -- will be out! Don't worry I will remind you again. How could I not? I have a reputation to uphold...