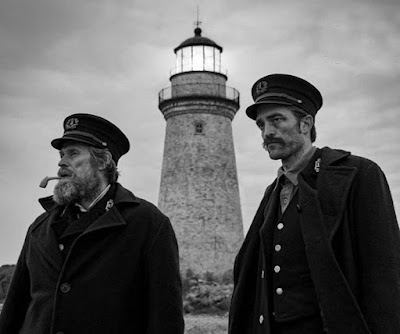 I usually don't post much about Cannes since I'm always bitter about not going, so three posts in the last week is unusual stuff. Cherish it! The line-up for the "Directors Fortnight" side-bar, which screens films out of competition alongside the regular festival, has been announced and there are several exciting titles, most exciting among them being the premiere of Robert Eggers' follow-up to The Witch called The Lighthouse with Robert Pattinson and Willem Dafoe playing isolated Nova Scotian lighthouse keepers facing down some monsters (I think) at the start of the 20th century. (See our previous post here.)

Other movies premiering -- something called First Love by Takashi Miike (on which I can find exactly zero information -- it's not even on his IMDb page yet) and Armie Hammer's buggy freak-out Wounds (which screened at Sundance earlier this year), as well as Luca Guadagnino's short film called The Staggering Girl with Julianne Moore (also Mia Goth & KiKi Layne & Kyle MacLachlan & Alba Rohrwacher) that he made for Valentino (the fashion brand) -- we told you about it previously here. That'll be a fancy party!
.
Who? Jason Adams When? 11:49 AM