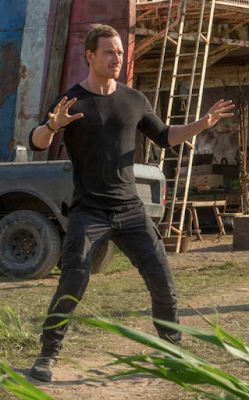 I've read a few X-Men comics but not enough to know shit really (basically my truth about everything save Jake Gyllenhaal Nude Scenes) so I hadn't heard of Genosha, the mutant paradise, until Empire just now shared this new image from Dark Phoenix showing Michael Fassbender's Magneto and Sophie Turner's Jean Grey there, apparently, which they explain better than I could. The picture just makes it look like some patchy grass but I guess it's heaven! Okay! 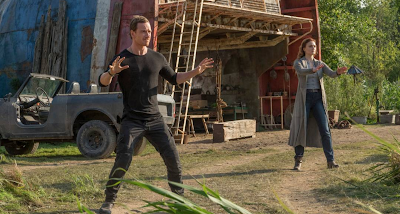 In other Michael Fassbender News (we haven't gotten the chance to utter those words in awhile) his production company made some noise for a big deal today, which is all pretty boring except that maybe this means he hasn't been entirely retired from the movies like we worried, and maybe he's getting together his own projects. Fingers crossed. We need Fassy back on-screen.
.
Who? Jason Adams When? 4:40 PM

Genosha was a brutal dictatorship/concentration camp where mutants were corralled and brainwashed completely of their free will.
They were renamed "mutates" and served homosapiens like slaves; doing everything from janitorial work to construction to preparing food to security detail depending on their mutant abilities.
Some people who had even the POTENTIAL for mutant abilities were enslaved as well in case their abilities were to surface.
Eventually there was an uprising, led by Storm and Havok who broke their brainwashing. Unfortunately, it left Genosha into dystopian like conditions.
Magneto eventually usurped the land, named himself King and brought it back to financial respectability, even forcing the United Nations to recognize Genosha as a superpower...

Then there was some trouble.