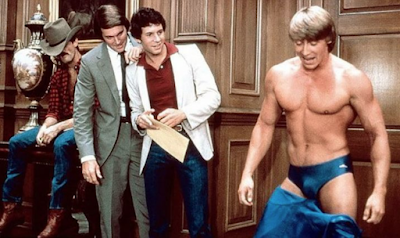 A big year for Gay Pride (Stonewall is celebrating its 50th anniversary at the end of June) just got even bigger for a certain subset of us gays and likeminded camp movie lovers -- Shout Factory! is releasing four particular glittery extravaganzas onto blu-ray for their very first time including yes indeed the tremendous and psychotic Village People musical Can't Stop the Music, which has been basically out of print for decades. This is a real thrill -- the film's been tough to see for far too long. I'd seen shitty quality copies previously, but then I got to see it in the theater a few years back and holy hell you have to see this thing cleaned up, it's something. SO MUCH SOMETHINGS. 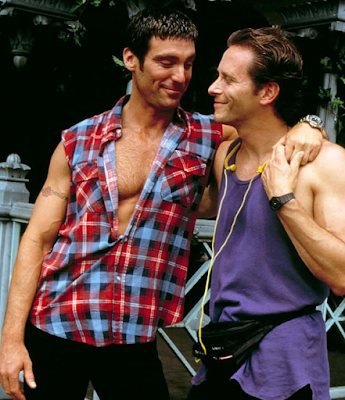 The other three films they're dropping are the terrific 1995 rom-com Jeffrey with Steven Weber and Michael T. Weiss (and a fabulous cameo from Sigourney Weaver) and the drag-queen comedy To Wong Foo Thanks For Everything Julie Newmar, also from 1995 (Beth Grant forever!), and then there's Boom!, the explosively hilariously awful Elizabeth Taylor & Richard Burton film from 1968 that is truly a camp spectacle to behold.

That and Wong Foo hit first on May 28th, while the other two hit June 11th. While I go see if anybody has any hot pants I can borrow, y'all should hit the jump to see all of the special features included on these discs...

I want all of them!